Hop On Over to Two Beer Festivals This Weekend

It seems that once spring arrives, it's time to bust out some brews. And we are so down with that.

After the response to the Edwardsville Fall Beer Festival last November was so outstanding, Laura High, co-owner of Global Brew Tap House & Lounge, decided to make it a biannual event.

"The response has been so positive," High says. "Last year when we were planning, we had no idea what the response would be. Our goal was 300 people, and we had more than 1,500 in the first two hours. This year we're planning on a lot of people. We're doubling everything -- all the volunteers, all the food and all the beer -- this year."

The festival is free, but you can buy beer tickets to taste beers from twenty different craft breweries from across the U.S. Local breweries will also have selections there, of course. Edwardsville restaurants Bella Milano, the Cup, Cleveland-Heath, Bigelo's Bistro, 222 Artisan Bakery and Craft Chophouse will provide food for the event, but make sure you have cash on hand for them. 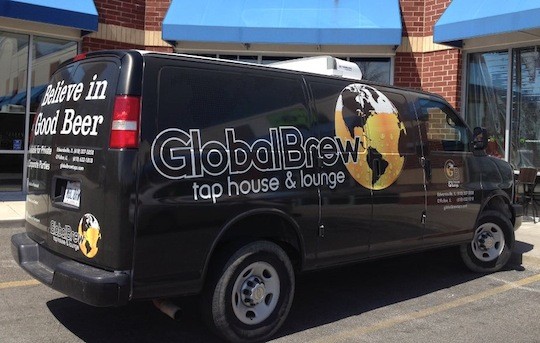 A portion of the proceeds from all food and drink sales will go to Hope Animal Rescues, an Illinois-based no-kill shelter.

"We have lots of different passions," High says, "so we're trying to spread the love around. We're all pet lovers, and it's really great when you can help out a cause that's near and dear to your heart."

Hope Animal Rescues will have dogs at the event, and visitors can apply to be fosters or to adopt. No dogs will be adopted from the event, as Hope likes to do thorough background checks for its pooches, but dogs make any event more fun.

High anticipates the lovely weather holding out for the event, but, she says, "if it's not gorgeous weather, we're just gonna get wet." As long as there's beer, man.

Global Brew Tap House & Lounge opened in Edwardsville two years ago, and High and her business partners (husband Ryan High and friend Ryan Lowe -- no joke!) recently opened another branch in O'Fallon. The bar has 50 beers on tap and another 200 in bottles, as well as a select stock of wine.

"It's kind of a celebration of our anniversary," says Robb Wiesen, manager of Ferguson Brewing Company, which opened three years ago. "We want to make people aware of what's here in Ferguson and in the area. It also gets people in Ferguson more familiar with the craft-beer scene in St. Louis."

Last year the weather wasn't great, but this year the forecast looks good, so Ferguson is hoping to welcome at least 500 people to the festival. Tickets are available online at Brown Paper Tickets, at Ferguson Brewing Company or at the festival if they haven't sold out.

Saturday is an exciting day for lovers of local craft brews, but Edwardsville and Ferguson are both off the beaten path a bit for most St. Louisans, so please employ a sober driver. Beer tastes best when you don't have to drive!