Sauce on the Side's Kung Pow Zone: What to Eat This Weekend and Where to Eat It 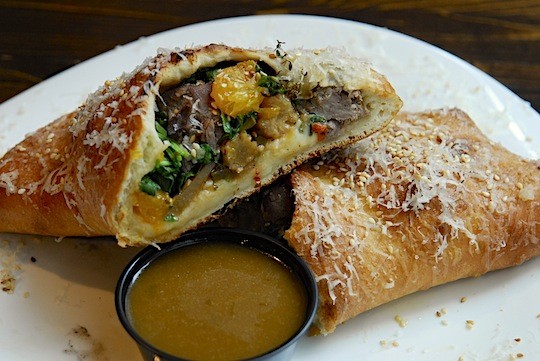 He's just laid waste to a calzone of his own, and he seems in no hurry to venture out into the rain and wind to carry on with his day. He's in the calzone zone. We want to be there too.

Chef and co-owner Brendan Maciarello tells us the calzone of the month was inspired by Asian cuisine. Cleverly named the "Kung Pow Zone," this 'zone is packed with beef marinated in a ginger hoisin sauce, spicy stir-fry veggies, wasabi arugula, mandarin oranges and mozzarella. The stir fry includes zucchini, eggplant, snowpeas, carrots, cucumbers, water chestnuts, baby corn and red peppers, so there's a lot of food in this doughy package. It's served with ginger soy sauce (on the side, of course) for dipping.

"Pow is right!" Maciarello says when he's done describing the fillings for the Asian calzone.

Though calzones and Asian food might seem too disparate to ever come together in perfect harmony, the boys at Sauce on the Side somehow make it work. Maciarello developed the Kung Pow Zone along with co-owners and calzone-makers Ryan Mangialardo and Daniel Porzel.

"It's got toasted sesame seeds on the outside," Maciarello explains, as if attempting to entice us even further before our food arrives. "Then you enter in to the spicy and sweet with the wasabi arugula and mandarin oranges."

And before you can say, "Where's the beef?" POW! There it is. Big chunks of ginger hoisin beef, which, we gotta say, goes surprisingly well with the baked dough that envelopes it. It's a complex 'zone for sure, but all the ingredients harmonize perfectly.

"It's had a really great reception so far," Maciarello says. "People love it."