This is part one of Gut Check's Chef's Choice profile of Brian Moxey of Pastaria. Part two, a Q&A with Moxey, will be published Wednesday. Part three, a recipe from Moxey, will be available on Thursday. 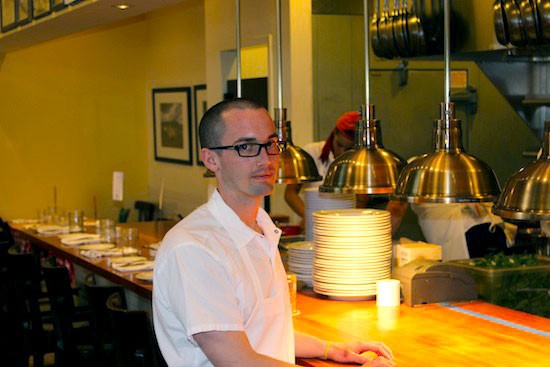 A chef can't hide at Pastaria (7734 Forsyth Boulevard, Clayton; 314-862-6603). Not only is its kitchen open to the spacious dining room, with cooks plating pastas and sliding pizzas from the wood-fired oven mere feet away from the diners who ordered the dishes, but there are also seats on either side of the pass, allowing patrons to chat with the cooks as easily as they might with a bartender or one another.

Executive chef Brian Moxey, who returned to his native Missouri from New York City to work at Gerard Craft's smash-hit Italian spot, wouldn't have it any other way.

"I like that there's so many gratifying moments in a day, especially in an open kitchen," Moxey says. "You can look out and see directly if you're making somebody happy or not. And we can see that hundreds of times a day. It's awesome."

Moxey, who turns 30 next month, didn't fall in love with cooking and the restaurant life until he was in college. Growing up in Sikeston, he says, "My mom cooked out of necessity, just to feed the family."

His favorite dishes were comfort-food staples like meatloaf or spaghetti. "Velveeta and Ro-Tel," he adds and then laughs. "There's still a soft spot in my heart for that -- or maybe a hard spot in my arteries."

Moxey landed his first restaurant job while a student at Mizzou, working the front of the house at a Ruby Tuesday. What appealed to him, he says, was "the energy of it."

"Even at a place like that in a smaller college town, it was a nice family, tight-knit. Everyone was friends; everyone got along. That was also the energy back in the kitchen. It was a fun energy to watch."

So enthralled was Moxey that he switched his major to hotel management and, as part of the program, took his first cooking classes. He cites Leslie Jett, the executive chef of the university's hospitality program, as a major influence: "His showing us the proper way to do stuff -- some students were drawn in by it. I was definitely one of those. I would stay after class, and he took me on.

"And then one Christmas I got a Wüsthof knife and the French Laundry Cookbook, and I stayed up all night reading that."

Moxey wanted to drop out of Mizzou to attend culinary school but acceded to his parents' wishes that he graduate. Then he packed up his Wüsthof and headed to New York City to attend the French Culinary Institute (now known as the International Culinary Center).

"I'd never been to a city that large," he says. "I was the quintessential starry-eyed out-of-towner when I first got there."

Though he didn't have much disposable income, he'd saved some money and while in school was able to sample some of the city's incomparable restaurant scene.

"I remember standing in line waiting for this one little noodle bar to open, and now it's Momofuku," he recalls. "That was pretty cool."

As a cook, however, Moxey knew he had much to learn before he could even enter the city's restaurant industry full-time. Because his classroom schedule left him evenings free, he decided to seek an evening job or externship.

"I went to WD-50," he says. He laughs ruefully at the memory of himself walking into Wylie Dufresne's acclaimed modernist restaurant. "Holy shit, was I in over my head. Those guys were amazing. Just to watch them, the way they moved and worked, was very impressive. Ultimately, I had to respectfully bow out.

"I didn't know enough about basics, and they were definitely not doing basics."

Finding a job proved frustrating. Many restaurant openings required two years' kitchen experience. Moxey eventually took to going door-to-door, asking for a chance. Which is how he ended up at Craftsteak, a venture from the (now celebrity, then simply acclaimed) chef Tom Colicchio.

"That was where I really learned what had to happen to make restaurants work," Moxey says. "That was a super-challenging time in my life. I remember I came home one night so defeated, I just sat on the floor of the shower, it was so horrible. But I got to learn how to operate on a higher level. I'd never really been held to that standard before. Obviously, they teach you things in culinary school, but it's not like working in a busy restaurant.

"I learned a lot of humility there. I learned how to work cleaner and faster and harder." 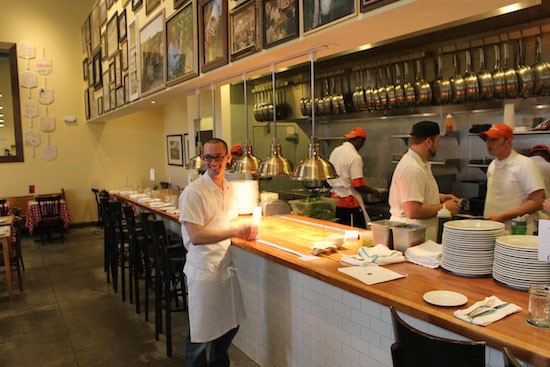 Moxey departed Craftsteak because he wanted to work on more refined food as opposed to the order-a-steak-get-a-steak approach. He found a position at Insieme, a new upscale Italian restaurant from chef Marco Canora.

"Insieme is the Italian word for together," Moxey says, "and there were old-world classics [on one side of the menu] and then kind of a interpretation thereof on the other side. That was an amazing experience. I thought I'd already learned how to push hard and work harder, and then I went there and really had to reboot the way I was thinking and how to approach food.

"Marco was very involved in the kitchen," he continues. "He spent less time at the pass, dictating orders and finishing plates and stuff. He would be back in your ear at your station. He was very, very hands on. Just because of what he wanted that restaurant to be."

Here Moxey experienced his first taste of big-time success: "We got a Michelin star. That was kind of the moment [when we said], 'Man, we're doing this.' It was a really tight-knit, competitive group of cooks. We would push and feed off each other."

Canora departed Insieme (the restaurant has since closed), and when he learned that Moxey was looking for a new position, he hired him at his Italian restaurant in the East Village, Hearth. Here, thanks to a series of personnel shifts, Moxey found himself in his first real position of authority, and over his three years at the restaurant he would eventually rise to the position of sous chef.

"It was lot," he says, "but again, it taught me how to push more and do more and get through mountains of work. I got a lot more comfortable with whole-animal butchery and making pasta by hand and stuff like that. It turned out to be a great time. I wasn't sleeping much, but it was good."

In the meantime, Moxey's wife, also a Sikeston native, had given birth to the couple's first child, a daughter, and the family faced the challenge of whether to try raising her in New York City: "Strollers and subway stairs are not friends."

Moxey already knew Niche's reputation. He'd eaten there several years before, and in packing to move to St. Louis found his menu from that night, on which he'd scribbled his notes about the meal. Gerard Craft's new Pastaria project jibed with the love for Italian cuisine that working with Canora had instilled in him.

"It's the Italian sensibility, the way they approach food...and dining also. I like the family [aspect] -- even if you're not part of the family, it's very welcoming. That's very appealing to me."

Pastaria has been a hit from its very first day, with plaudits from this and nearly ever other local publication. Waits at prime dining times can be an hour or longer. Moxey appreciates the success, of course, but what impresses him is the range of its success.

"Pastaria kind of evolves over the course of the day," he explains. "We get the lunch crowd from business, and they have to get their salad or their plate of pasta, and then they got to get out. And then we have our downtime in between -- we'll have some people come in casually at the bar and have some beers.

"And then we just get an onslaught of families, which is awesome, all these little kids running in. The room's still bright, and families are having a good time, being able to get out and have a meal together, which is great. Then as the sun goes down, you'll start to see people a little bit more dressed up for date night.

"We're four different restaurants in a day. It's a lot of fun."

Though Pastaria's menu largely stems from Craft and his top lieutenant and business partner, Adam Altnether, Moxey has been able to introduce his own dishes as specials, including the ever-changing pizza of the day. Pastaria regulars have taken notice.

"I put the bucatini all'amatriciana on -- which is certainly not a new dish by any stretch, but I love it. But then I took it off and ran carbonara for a week or two. I got positive reviews on that, but we had multiple people ask every night, 'Where'd the all'amatriciana go?'

"So it was like, wow, I was super happy they were that into that dish."

With his duties as Pastaria's executive chef, not to mention the demands of being the father of a toddler, Moxey hasn't been able to explore St. Louis' restaurant scene as much as he would like. (For his upcoming birthday, he plans to take a couple of days to hit up several places he's been meaning to visit.) Still, he's been impressed not simply by the quality of the scene, but by its spirit.

"It's really cool the way everybody works together here. There were definitely friendships in New York between different restaurants and restaurant families, but there was still this competitive mindset. Even if it was in the background, it was always there.

"But here everyone's just so welcoming and supportive: 'Hey, man, can I help you out? Do you need anything?' It's just easy to come into and feel welcome."

This is part one of Gut Check's Chef's Choice profile of Brian Moxey of Pastaria. Part two, a Q & A with Moxey, will be published Wednesday. Part three, a recipe from Moxey, will be available on Thursday.