A Good Man Is Hard to Find's "Pork-n-Beans": One of 100 St. Louis Dishes You Must Eat Right Now (Seriously, Only Three Weeks Left)

A Good Man Is Hard to Find, the second limited-time restaurant concept that chef John Perkins has hosted at Entre (360 North Boyle Avenue; 314-632-6754), ends on Saturday, May 4. That's Derby Day -- and if you have yet to try Good Man's Southern-comfort food, you, too, are in a race to the finish. There are only three weeks till it closes, and it's open only four nights a week, Wednesday through Saturday.

At a dinner this past weekend with friends -- Perkins knows me dating back to when he helped my wife, Brooke Foster, on a feature project for the RFT, so I wasn't anonymous -- I was able to try several dishes from the menu. The best among equals was the "Pork-n-Beans."

The pork is a hunk of belly from a Berkshire pig (sourced through the local company Mac's Local Buys). Perkins brines the belly and then sous vides it with duck and pork fat, garlic, thyme, bay leaves and star anise for twelve hours. Order the "Pork-n-Beans," and the kitchen drops a belly in the fryer.

The result is a piece of pork belly that features both the fork-tender lusciousness of sous-vide meat and the crispness of bacon or chicharrones. The flavor is far more complex than a simple piece of fried pork -- I definitely tasted the star anise -- yet still, ultimately, porcine.

More pork flavors the Sea Island red beans served alongside the belly. These, Perkins reveals, the kitchen cooks with ham hocks. The greens, visible in my photograph beneath a fried egg, the kitchen braises with Coca-Cola. For a grace note, maple syrup and fennel pollen dot the dish.

And the egg? Well, the fried egg adds $3 to the dish's base $20 cost, but it's a farm-fresh egg from a small Mennonite farm in Illinois, and it increases the richness of the dish to the point where it's not simply comfort food, but Comfort Food.

Or, as Perkins himself tells me via e-mail, "The egg is optional, but optimal." 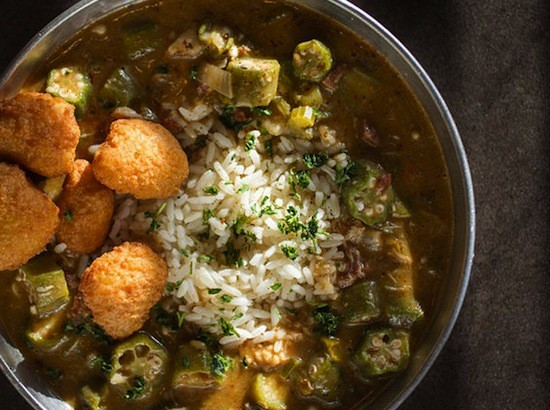