Yesterday, under ominous storm clouds, the Schlafly Farmers' Market (formerly known as the Maplewood Famers' Market) opened for business in direct defiance of the blustering winds.

Held each Wednesday until the end of October from 4 to 7 p.m. in the parking lot of Schlafly Bottleworks (7260 Southwest Avenue, Maplewood), this gathering of local producers presents an eclectic array, ranging from Hanley Fold Farm's goat-milk soap to the sugary staples of Cherokee Street's El Chico Bakery.

Though the list of vendors is subject to change throughout the year, for the most part a reliable cohort sets up each week. But while the vendors might remain familiar, the market will evolve as the seasons change.

The best example might be Three Rivers Community Farm, located in Elsah, Illinois, which currently offers winter greens -- spinach, arugula and bok choy, for example -- but with warmer weather will come a full cornucopia of spring crops, including squash and cherry tomatoes. 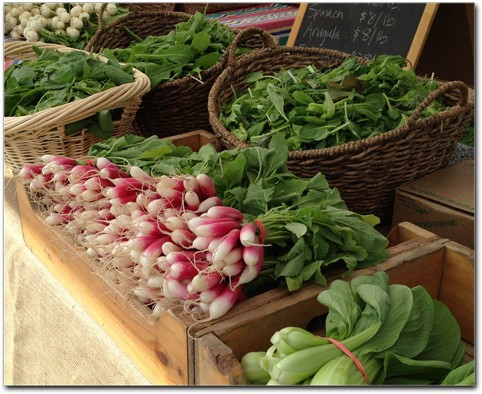 Three Rivers, which sits on twelve acres just off the River Road, relies on more than 250 community members to support its goal of supplying the area with naturally grown, chemical-free products. On this early-season market day, despite the inevitability of a severe storm in the offing, the Bottleworks parking lot quickly fills up, evidence of the growing clamor for all things grown local. Eager customers, intent on procuring honey, potted flowers and sugar cookies, tote their own baskets and grocery sacks, the better to haul off the loot.

In addition to the produce, snacks are available for on-site consumption. Kerry Soraci's I Scream Cakes in particular figures to do well as the temperature rises. Soraci sells made-from-scratch, artisan ice cream and other frozen treats, including a number of gluten-free options (cupcakes!), which she crafts in her ice-cream boutique on Cherokee Street. Much like her neighbor El Chico, Soraci uses the market as way to introduce itself to a new neighborhood of potential consumers.

The Bottleworks and market work well together: a local brew and local food coming together amid the aroma of fresh hops. Schlafly adds more to the atmosphere shortly after the market folds its tents till next week, setting up the BIG 'B' Jamboree, an open mic/jam session hosted by Miss Jubilee every Wednesday at 8 p.m.

Homegrown talent serving as the following act to a homegrown farmers' market....