Pack a Restaurant Picnic for Your Next Visit to Busch Stadium 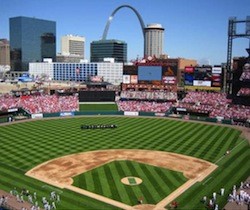 Gut Check loves us a day at the ballpark. And Gut Check loves us some ballpark food. Nachos? Bratwurst? Soft pretzels? Pretty much anything shellacked with orange cheese product? Yes, please. We ain't always caviar-and-Champagne snobs.

Gut Check, however, doesn't loves us the cost of ballpark food.

Thankfully, the regulations at Busch Stadium allow you to bring in soft-sided 16-inch x 16-inch x 8-inch coolers -- which you can pack with whatever food you like.

We've put together a list of some of our favorite carryout-friendly restaurants. Now, you could spend as much at these restaurants as you were planning to spend at the ballpark, but we promise you'll get more for your dollar. Call it the sabermetrics of snacking, if you like.

And, if we might revert back to caviar-and-Champagne mode for a moment, you'll get better food, too.

(Note that, as with any picnic, planning plays a role. Not every restaurant will be open just prior to first pitch.) 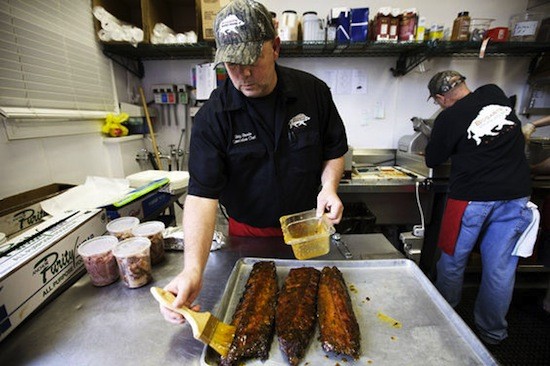 Bogart's Smokehouse (1627 South Ninth Street; 314-621-3107 ) and Pappy's Smokehouse (3106 Olive Street; 314-621-3107) Yeah, you can find pulled pork and smoked turkey legs at Busch. Know what else you can find there? Three dozen boxes of leftover Rally Squirrel T-shirts, which bear as much resemblance to true 'cue as what the concessions sell. Treat yourself to the real thing. We suggest Bogart's for day games (it closes in the late afternoon) and Pappy's for either day or night starts. Plus Pappy's is Adam Wainwright-approved. And you don't want to cross Adam Wainwright. He's taller than you.

La Vallesana (2801 Cherokee Street; 314-776-4223) and Siete Luminarias (2818 Cherokee Street; 314-932-1333) Add another taqueria or two if you want. Pack your picnic as a tour of Cherokee Street. Whichever route you take, you'll enjoy the smug satisfaction of watching all those poor suckers trying to scrape up the last bit of "cheese" with a stale tortilla chip while you're chowing down on real-deal Mexican street fare.

Salume Beddu (3467 Hampton Avenue; 314-353-3100) OK, so that friend of a guy you sorta know didn't come through with those sweet all-inclusive tickets behind home plate, and you're stuck instead way up in the right-field nosebleeds. Still want to feel like a swell? Stop by Salume Beddu and pick up some of its nationally acclaimed artisan salume to snack on during the game. Better yet, if the "Beast in a Box" sausage sandwich is available, get that. Then, when someone nearby orders a bratwurst, you can put on your best Condescending Rich Person voice and ask, "Oh, is that also some kind of sausage?"

Do you already take advantage of Busch Stadium's cooler rules to pack your own picnic? Let us know in the comments what you like to bring.