This is part two of Gut Check's Chef's Choice profile of Chris DiMercurio of Vino Nadoz. Read part one, a profile of DiMercurio, here. Part three, a recipe from DiMercurio, will be published on Friday. 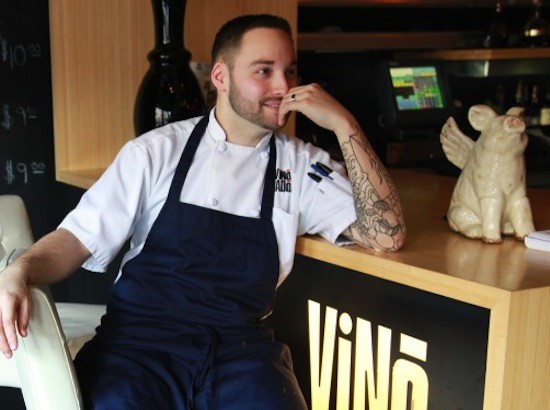 Chris DiMercurio worked alongside -- and learned from -- some of St. Louis' talented young chefs in Gerard Craft's restaurant group. From there he took a high-paying cooking job at a corporate hotel chain, but the long hours made him miserable. He nearly gave up cooking -- until his wife asked him what he really wanted to do.

"I said cooking," he tells Gut Check. "I love cooking. I love making people happy when they eat the food I made for them. And she was like, well why would you ever give that up?

Now his passion for food is on display at Vino Nadoz (16 the Boulevard, Richmond Heights; 314-726-0400) and throughout our interview with the chef.

See Also: - Chris DiMercurio of Vino Nadoz Wants You to Trust Him

What was your favorite meal as a child? My grandma on my mom's side made cube steak cooked and tenderized in cream of mushroom soup, mashed potatoes and corn. I would chop it all up and mix it into one gray glob. My mom actually just made me that for my birthday meal.

What is the earliest memory you have of yourself cooking? I was in grade school, and when I came home after school, I would cook myself snacks. That was back when those Boboli pizza shells just came out, and I'd make myself these weird pizzas from what was in the pantry. I became really good at making sauces -- weird combinations for stuff. When I would help my dad cook, I would make sauces for things.

What was your first paying job in the food industry? The Victorian National Golf Club in Evansville, Indiana. I was the dishwasher/prep/garde-manger dude. It was basically a two-man line, and one guy worked all the hot-line stuff, and I did all the cold and the dishwashing.

After that I worked at the Petroleum Club, but I hated that place, and then I went to the Culinary Institute of America for my bachelor's degree. During school I staged at places in the city, and I externed at the Broadmoor Resort and Spa in Colorado Springs. I came back to St. Louis and worked at Herbie's Vintage 72 for a year.

Then I moved to Burlington, Vermont. Vermont was a big influence in my outlook of what legit farm-to-table was. Like, we would go to the farm and get what we needed or the farmer was there at your place. I worked at a place called the Starry Night Cafe under chef Josh Krechel, who is an absolute beast and one of the best chefs I've worked under. The food was on par woith very fine-dining cuisine, but the atmosphere was super relaxed. It was a three-person line, and we got our asses handed to us all the time. 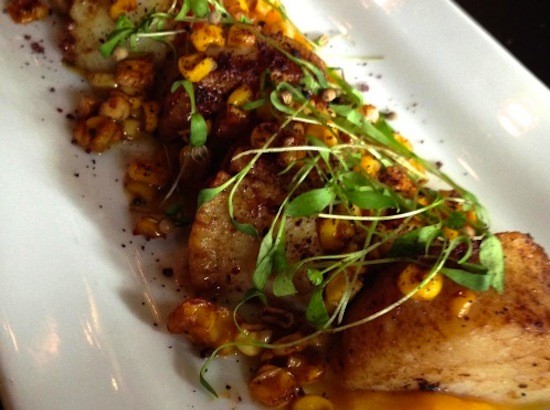 What do you eat? I cook a lot at home. My wife is a badass baker but not a cook, so I do all of that. I pretty much cook everything and will refrigerate or freeze it for my wife for the week.

What would we be most surprised that you eat? Once or twice a year I will completely destroy a Filet o Fish. And a Double Pounder with Cheese. But that is usually alcohol induced. And I will completely do up a pack of ramen. Mix it up with different veggies, put a fried egg on top of it.

Favorite restaurant outside of St. Louis? The best meal I ever ate was at Le Bernardin. It was like a $300 lunch, but everything was perfect. I mean, perfect.

Food you most want to get customers to try? Pig face. I'm a huge fan of lesser-known charcuterie items. Pickled pig's tongue, things of that nature. I actually have three or four tongues in my fridge right now. I love pig face. I wish more people would be more comfortable with eating offal.

The most essential ingredient in your kitchen? I want to say pork, but that's not true because I had to scale back. I would say my selection of spices that I have accrued from many different places -- like really good regional salts, Aleppo pepper, espelette, ras el hanout -- stuff like that can really expand what you do.

A food you dislike? I dislike coconut and, um, for different reasons truffle oil. Because people who don't know how to use it are pissing in the Kool-Aid, and they ruin it for everybody.

A food you could not live without? Pork. That is not hard. If I could not have pork I would literally die. Without pork you could just cut the cord. I'm done.

What do you think St. Louis needs more of? People who are willing to travel outside of their comfort zone. We have in St. Louis a pretty good sized group of people going to Niche and Blood & Sand -- places that are doing really great food.

Those same people don't realize, however, that smaller places like Home Wine Kitchen, Cleveland-Heath and this place, which are not fine dining per se or hugely upscale, are also doing great food, just in a more casual atmosphere. Creativity does not have a price. Forward-thinking good food does not always have to be expensive.

I think Matt [Daughaday] proved that at Taste in spades. All of his items on the menu could be tweaked, put on Niche's menu and sold for $12 a plate more, but that's not the purpose. It doesn't always need to be that way. I have the same problem too sometimes. I want to gild the lily, but at the end of the day i'm just making a goddamn pork chop. It's a really great pork chop, but it's still a pork chop. Like I think our Amish chicken is one of the best roasted chickens you'll find in St. Louis, and sometimes I'm like, "How can I make this better?" And I have to remind myself to leave it the fuck alone -- it's a really good chicken the way it is.

What was your proudest professional moment? When I received my first bit of press. It was a great review, and it was so great to have someone validate me, like what I was doing wasn't a huge waste of time. I mean, it's one thing for your mom to tell you, "You aren't ugly." People I know will blow sunshine up my butt. But to have someone who was impartial and in the business say that they liked my food was a big deal for me.

What was the most difficult lesson you've learned in this business? I have a hard time accepting compliments because I generally have a self-deprecating personality, but you can't act like a douche, so knowing when to accept praise is hard. Taking shit is easy. I've taken so much crap from chefs that my skin is so thick it just washes over me, but compliments are a whole other thing, and that's been hard to get used to because in the back of my mind I'm always thinking that I can do it better. And patience. When I changed everything here I was like, "I'm doing good food. Why isn't anyone paying attention?" But this place is so hidden that I have to battle the fact that we aren't going to be noticed as much as other places.

How do you feel about Guy Fieri? I was actually still in school at the CIA when he did a show on The Eveready Diner, which is right next to campus. We were at the diner the day after the taping, and the only thing employees could talk about was how much they hated him. He was a giant tool. He is to food what Rachael Ray is to actually being a chef. He looks like Eminem's old creepy uncle that did time in the pen but won't say for what.

This is part two of Gut Check's Chef's Choice profile of Chris DiMercurio of Vino Nadoz. Read part one, a profile of DiMercurio, here. Part three, a recipe from DiMercurio, will be published on Friday.