Bob and Barb Mepham have been selling fresh fish in University City for more than three decades, first in the Market in the Loop, from the back of a pickup Bob drove down each week to Grand Isle, Louisiana. When the Market constructed a permanent, year-round building fronting Delmar Boulevard, Bob's Seafood was an anchor tenant. But a half-dozen years ago the Mephams left the Loop for the western fringe of U. City, lured by more space for their stock, now flown in from around the world, and their fleet of delivery trucks (ever wonder where local restaurants get their seafood?). For as long as Bob's Seafood (8660 Olive Boulevard, University City; 314-993-4844) has been in business, it has been the go-to place for fish and shellfish for the discerning St. Louisan. The fishmongering business has changed, but Bob and Barb and their skilled staff haven't -- which explains why Bob's is a perennial "Best of St. Louis" honoree.

And why Gut Check contributing photographer Crystal Rolfe was drawn to the famed seafood counter to train her lens on this week's food-porn bounty.

Found off the coast of Florida, the stone crab is one of the ocean's miracles: After trapping the shellfish, a crabber will remove one claw (always the bigger one!), then throw the crab back into the water, where the creature will soon regenerate its missing claw.

Bigeye tuna gets its name for obvious reasons. Not so obvious is the fact that, unlike so many other species of the beautiful predator, the bigeye population is considered (relatively) stable, according to the Monterey Bay Aquarium's informative Seafood Watch.

Overfished for several generations, the venerable, succulent Maine lobster fishery has made a strong comeback over the past decade plus -- which means lower prices and greater availability, even in the Midwest.

Yellowfin tuna, also known as ahi or maguro, ranges widely in the world's oceans. Like the bigeye, it can be a good sustainable choice, provided it's caught via a fishery-friendly method.

Tony and Joe show off some of the raw material. 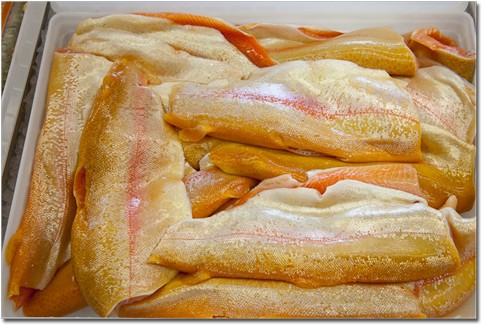 These days, trout may be marketed as "steelhead" or -- see above -- "golden." Your grandpa would still call 'em rainbows, and he'd be correct. These trout, like most sold in the U.S., were farmed (in Idaho).

Striped bass from the Pacific is tasty, and typically sustainably farmed.

Editor's note: Sometimes food renders Gut Check speechless. That's why God invented the DSLR. In our continuing effort to cause your mouth to water onto your keyboard, we bring you our weekly Food Photo Essay.