Acero's Red Wattle Pork Loin: What to Eat This Weekend and Where to Eat It

Gut Check tells you what's new and tasty at our favorite restaurants. 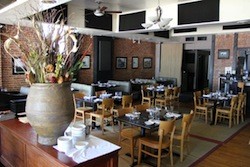 "Hopefully this weather will hold out and we can get more local produce," he continues.

Besides local produce, Gnau also eagerly awaits the arrival of spring salmon. No Scottish, Atlantic or farm-raised salmon for him -- he wants the fish with the high-fat content. Right now, though, the price quoted by his purveyor is too high.

As for this weekend? Right now Gnau is excited about pork.

"I'm not quite sure," about the exact preparation, he tells me. "Some root vegetables, some arugula coming in. I've got some English peas. I'm not too excited about cleaning them, but it's worth it, it's so delicious."

Gnau also recommends an Acero stand-by, the gnocco fritto appetizer and a glass of Lambrusco: "If people want to come in and have a nice little snack and eat some meat donuts, that's always a safe bet."

St. Louis restaurants: Do you have a new dish to share with Gut Check readers? Drop us a line.