Andrew Jennrich of Farmhaus Sees St. Louis on the Precipice of National Recognition

This is part one of Gut Check's Chef's Choice profile of Andrew Jennrich of Farmhaus. Part two, a Q&A, will be available Thursday. Part three, a recipe from Jennrich, will be published on Friday. 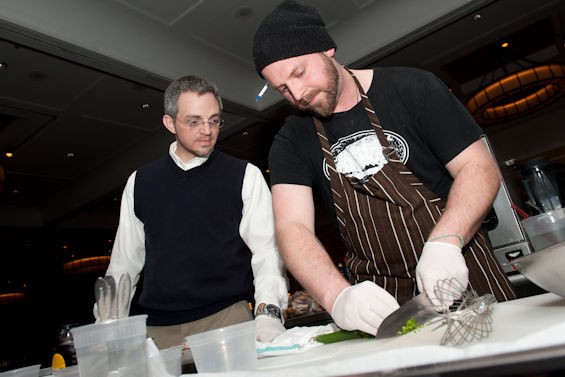 For many years, the migration went like this: Talented young St. Louis cooks, eager to make their bones working for great chefs serving progressive cuisine, packed up their knives and toques and headed north to Chicago.

Chicago native Andrew Jennrich, the chef de cuisine of Kevin Willmann's Farmhaus (3257 Ivanhoe Avenue; 314-647-3800), points to Paul Virant as an example. A St. Louis native, Virant opted to pursue a culinary career in the Windy City. There his restaurant Vie won a Michelin star (since lost), and in 2007 Food & Wine named him one of the magazine's "Best New Chefs."

Jennrich once asked Virant why he departed St. Louis for Chicago. Virant told him that at the time he saw few options in the St. Louis dining scene besides Annie Gunn's.

Flash-forward to 2011: Jennrich and his wife both worked in restaurants in Chicago, she in the front of the house. Their first child, a daughter, was six months old.

"Let's just say that we drastically underestimated the financial cost of having a child with two restaurant people in the city of Chicago," Jennrich says. "In six months we got swallowed up. The closest daycare to our place was $2,400 a month. Rent is $2,000.

Jennrich's wife hails from St. Charles, so St. Louis offered both financial relief and the support of nearby family. As for employment, Jennrich threw a Hail Mary. "I sent Kevin [Willmann] a blind e-mail. It said, 'I have no idea if you're hiring. I believe in what you're doing. I share a lot of the same ideologies. If there's any possibility for me to be part of the team in some capacity, I'd love to.'

"He called me three days later and said, 'Why don't you come in and stage?'"

Jennrich grew up on the northwest side of Chicago -- yes, he's a long-suffering Cubs fan, and, yes, the Cardinals' success over the two years that he's lived here has been "awful" -- but didn't discover cooking as a vocation until he attended St. Norbert College in Green Bay, Wisconsin.

"I did what kids do when they go to college. I worked all summer and saved money when I was eighteen years old. And by December I blew every single dime."

A friend who worked at a local brewpub offered to set up an interview. "I really don't know what I'm doing with cooking," Jennrich says. "He's like, 'It's Green Bay, Wisconsin. You don't really need to know what you're doing.'

"I went in and met the chef. I literally started the next day. It was simple food, nothing crazy, but good. What I really enjoyed about it, it was something different. I'd never worked in a kitchen environment, with this teamwork aspect, this family environment. I totally enjoyed it."

"In Green Bay, I was like an infant," Jennrich recalls. "I was a little child. 'Show me how to hold a knife correctly.' So I absolutely had a whole lot of information to catch up on in culinary school. Not just learning how to make stock, but learning about the restaurant world."

The breakthrough moment came when his baking and pastry instructor handed him a business card. "I think you should give this guy a call," she told him. "You'd benefit really well from this experience."

The restaurant was Trio. The name on the card was chef Grant Achatz, now the owner of the world-renowned restaurants Alinea and Next.

Jennrich did his culinary-school externship under Achatz at Trio, an experience he now calls his "epiphanic" moment.

"I probably looked like a complete idiot in there," he says. "I don't know much about much, but their environment is, 'I'll take the hardest worker over the most talented person.'

"That was my ah-ha moment. The doors just swung open. I saw what possibilities there are, what food potentially could be, what was out there in the world that I'd never seen before."

Achatz he describes as "extremely focused and extremely quiet."

"I think I heard him raise his voice twice, three times," he continues. "But it was a good experience in the sense that it showed me at a young age in my career how hard it is, how much you have to sacrifice, how much you're willing to give up. It breaks you down, military style. You have to create this shell if you're going to be strong enough to get through it." 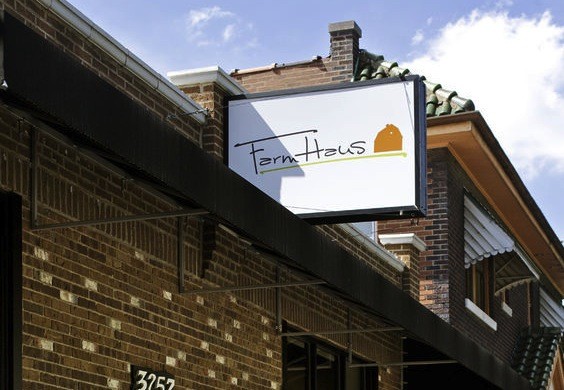 Jennrich then traveled the country, living in Colorado, San Francisco and Las Vegas. Among the restaurants he worked was the Las Vegas outpost of Daniel Boulud's namesake venture.

"You can try all the food you want, but it's different when you're there," he says. "It's different to eat Chinese food in San Francisco -- it just is. There's an experience that's bigger than just food. That's why I wanted to go around the country, to take in the whole thing."

Family brought him back to Chicago. His mother had fallen ill. Two weeks after receiving the phone call with the bad news, he packed up his entire life and returned home. (His mother, he hastens to add, is fine now.)

Though financial stress forced Jennrich out of his beloved Chicago and its thriving restaurant scene, at Farmhaus he found a kindred spirit in Kevin Willmann.

"The food that he likes to do is the food I like to do. I like trying to see the whole thing as a bigger picture, promoting local farms: 'Look at how good our product is. This comes from right here in this area.'

"I love not getting things in [already] processed: whole fish, whole pigs. I love that. I love this renaissance of people realizing that a pig is not just a porkchop, or that there's more than a tenderloin on a cow.

"Chef's been doing that for a long time."

In Willmann, Jennrich also sees the same intensity of focus that he found so appealing in Achatz.

"Chef's been doing his nachos for how long?" he asks, referring to the sweet-potato nachos with blue cheese and bacon that have been one of Willmann's signature appetizers since his time at Erato on Main in Edwardsville, Illinois.

"How many plates of nachos has Chef put out in his career? Thousands? Tens of thousands? It's so mundane at this point -- regardless how great the flavors are -- you've seen it so many times, it would be so easy [to let pass] that the chips are a little dark, or there's not enough bacon on that one, or whatever. But he is as intense about every plate of that as I'm sure he sure the first time he created it way back in the day at Erato.

"That's something you need to see as a young line cook, that kind of consistency and standard. And if you're not shown, where are you going to learn it from? With Achatz, we had to peel all the onions right when they came in, instead of just letting them sit around nasty in their skins. That's just a small little organization thing, but it resonates when you experience it."

As Farmhaus' chef de cuisine, Jennrich collaborates with Willmann on new ideas, a process that he describes as a back-and-forth over phone and text messages.

"That's kind of how it works. I'll send Chef an idea, 'I was thinkng this, this and this.' He'll text back, 'I like that part, that sounds good, but what about this?'"

"The market dictates a lot of what's going to happen," he continues. "Strawberries are coming into season. So we'll just get some strawberries from the store to practice with. So when the actual market stuff comes in, now we know this is what's going on. We're also trying to stay ahead of the game price-wise. You don't want to be experimenting with white asparagus or something that costs $10 a pound."

Though Farmhaus is best known for its menu of not-quite small plates that diners often share, the restaurant has also introduced a tasting menu composed of dishes not found among the à la carte fare. Actually, in recent months, there have been two tasting menus, the main selection and a menu composed entirely of offal dishes.

"Because of what Chef's accomplished, we're probably able to push boundaries a little bit more than other places can," Jennrich says. "I think it's a good thing for people to get pushed out of their comfort zones. Not just somebody trying pork kidneys or something like that, but down to the smallest thing, like, 'I never knew how good pickled Brussels sporuts are.' You can open up all these doors for the guest that they never knew they loved something so much."

Jennrich is quick to point out that Farmhaus can push these boundaries because of the talent in the kitchen: "We're able to do more with more talented people in the kitchen. I can't work every station. Chef can't cook every plate of food. The whole team right now warrants that we can do all this stuff, which is great."

And he hopes this is a sign that homegrown talent will no longer flee St. Louis for supposedly greener pastures. "The more talent that stays home, [our food scene] just gets bigger and bigger."

"St. Louis is on the precipice," Jennrich says. "Chicago will be never New York, which is fine, and San Francisco will never be Chciago, and that's apples and oranges to some degree.

"St. Louis will never be Chicago, but when you're talking about these quality, mid-tier cities, Charleston or Nashville, these second-tier cities that are so solid, I really think we're this close. It's just going to take one little thing -- whether it's Gerard Craft winning [the James Beard award] in May -- where the floodgates just open up."

This is part one of Gut Check's Chef's Choice profile of Andrew Jennrich of Farmhaus. Part two, a Q&A, will be available Thursday. Part three, a recipe from Jennrich, will be published on Friday.