It can be easy to overlook Lindenwood Park: It doesn't have the glitz of addresses in nearby St. Louis Hills, nor does it retain the strong Italian accent of the Hill. But tucked among the brick houses in this quiet neighborhood are noted bakeries, a salumeria, an old-school pizza joint, dive bars and what many people would say is the best restaurant in the city. In this post we meander through Gut Check's favorite restaurants in south city's Lindenwood Park. 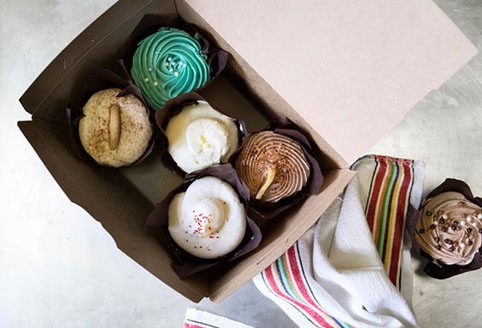 Pint Size Bakery & Coffee(3825 Watson Road; 314-645-7142) Perhaps the most appropriately named bakery in town, Pint Size Bakery & Coffee is but a blip on Watson Road, plopped in Pietro's parking lot. It's fronted by owner and chef (and St. Louis native) Christy Augustin who calls her from-scratch style of baking "punk-rock grandma," meaning that she uses all the good stuff from yesteryear, such as actual butter and sugar, to make simple but indulgent delights like sweet and savory scones, cookies, oatmeal cream pies and salted-caramel croissants, Atkins be damned. The latter, made only on Saturday mornings, has such a following that there's a two-per-customer limit. And like everything else on Augustin's menu, when they're gone, they're gone.

Pizza-a-Go-Go (6703 Scanlan Avenue; 314-781-1234) If there exists a better, more authentically south-city afternoon than bowling a couple of games at Epiphany Lanes then walking across the street -- six-pack in hand -- to Pizza-a-Go-Go, we don't know what it might be. For nearly 40 years, the LaFata family has turned out delicious thin-crust pizzas utterly, blessedly devoid of pretension. The crust hits the thickness sweet spot between cracker-crust and small-town phone book, and the toppings are classic -- Canadian bacon is about as exotic as it gets, so look elsewhere for pork-belly pizza or other such nonsense. Here, it's cash or check (check!) only, BYOB and open from just 4 to 9 p.m. each day but Wednesday, and till 10 p.m. on Friday and Saturday.

Salume Beddu (3467 Hampton Avenue; 314-353-3100) Spaniards rightly trumpet their jamon iberico -- cured ham made from certain pigs that munch on certain acorns from a certain part of the country -- almost as much as they do their futball teams. But St. Louis has its own serious cred when it comes to "beautiful cured meat" in Ben Poremba and Mark Sanfilippo's Salume Beddu, located in a modest strip-mall storefront off of Hampton Avenue. It captured the praise of Forbes' Larry Olmsted who called it "The Best Salami in the Country." And that was just the headline! (For the record, Salume Beddu's pork ribs were our favorite dish in all of 2011.) The co-owners are involved in nearly every part of getting the pigs to the plate: They know the farms where the pigs were raised, the farmers who raised them and the pigs' diets. It shows. Be sure to stop by for lunch for its celebrated "Beast in a Box": fennel-spiked fiama sausage and Spanish paprika topped with peppers and giardiniera, or browse its retail area from 11 a.m. till 6 p.m. Tuesday through Saturday.

Biggie's (3332 Watson Road; 314-781-0060) As bigger and brighter and newer restaurants spring up around it, Biggie's remains a loyal friend and Lindenwood Park neighborhood stalwart even three decades into its run. Faded pictures of St. Louisans (famous and non-) and memorabilia populate its walls like pages from a yearbook. But what drew people into its doors ages ago still does the trick today: huge portions of comfort food done right. Its veal parm sandwich is a particularly good example, the lightly breaded cutlet smothered with cheese and served on a soft French bun.

Farmhaus (3257 Ivanhoe Avenue; 314-647-3800) Kevin Willmann's Farmhaus has earned loud praise from near and far for its take on contemporary, new American cuisine. Willmann himself was named a Best New Chef by Food & Wine in 2011 and was a James Beard finalist for Best Chef: Midwest that same year. And though the restaurant is serious about using local purveyors for its meat, fish and produce to coax intensely flavored food out of seemingly simple ingredients, it manages to not take itself too too seriously: It has trasnformed blue-plate specials into can't-miss daily events (Monday might be best for its fried chicken). Its cooks talked their way into the Cardinals clubhouse bearing meatloaf after the team clinched the World Series. It serves dishes like "Breakfast," a poached egg, maple sausage, roasted pork belly, corn-flour blinis and whipped maple butter. But the escolar is no joke: Poached in butter and white wine with grilled prawns and a seasonal vegetable, it is Farmhaus' best of the best.

Stellina (3324 Watson Road; 314-256-1600) Intimate and charming, Stellina is a sweet little neighborhood place to tuck into for a lovely meal...and then keep it your own little secret. Alas, word spread quickly about its fresh pasta dishes, inventive seasonal cocktails and sandwiches so good that they deserve a less-clunky-sounding name than "sandwiches." So much so, in fact, that it underwent an expansion that nearly doubled its seating capacity a scant three years after it opened. (It's still intimate, though, seating around 70.) Stellina's menu is brief, but there is plenty of depth: Fresh pasta dishes always include a long-cut pasta, a stuffed pasta and a lasagna. Keep an ear out for the ever-changing specials. Weekends bring seafood such as steelhead salmon and monkish, and Stellina calls its "Pork Duo," which features pork in any number of incarnations and presentations, "one of our favorite entrees ever." Sign up for its excellent, informative newsletter to keep current on all its weekly offerings.

Trattoria Marcella (3600 Watson Road; 314-352-7706) Even in a city with one of the country's best-known Italian neighborhoods, Trattoria Marcella proves that there's plenty worth exploring just beyond the Hill. Open since 2009, it tidily fills a niche in St. Louis' Italian dining scene: An evening in the dining room promises an experience that's upscale without being stuffy, while enjoying a few drinks and a pizza up at its bar is a more casual, but no less delicious, affair. The specials are reliably inventive yet approachable, and we've counted the velvety "Straw and Hay" pasta -- egg and spinach noodles tangling with mascarpone, coppa, crimini mushrooms and sugar-snap peas -- among our favorite dishes in the city.