Is Justin Haifley of the Tavern Kitchen & Bar One of Food & Wine Magazine's Best New Chefs for 2013? [Update: Nope] 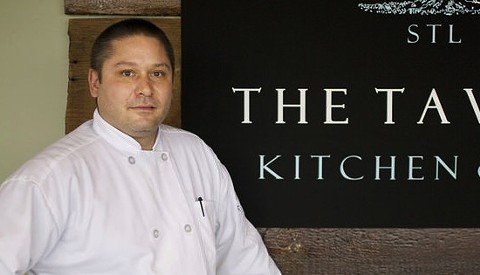 @paulhting ah. You're right that you're wrong:)

Keep reading for a peek into what this job does to your brain.

I'm going to say at the outset that this post isn't news, it isn't a scoop, it isn't a sly attempt at conveying what I know to be true but was told to me "off the record." It's complete and total speculation -- but it isn't entirely baseless speculation.

Food & Wine announces the chefs tomorrow. Here is my case. Sketchy, yes, but not completely crazy.

1) We know that Haifley is on the Food & Wine radar because just last month he was one of the nominees for the magazine's "People's Best New Chef" competition. A public vote determined the winner of the contest, but Food & Wine presented the slate of candidates.

2) Today, as has become her custom, Food & Wine editor-in-chief Dana Cowin has been tweeting clues to the identity of the ten chefs. The second clue was intriguing.

Midwest is obvious -- but uselessly broad. "Morningtree" is the key. What is the Tavern's logo? A tree with a rooster standing underneath it.

3) My final clue is both the most far-fetched, but also, oddly, the most compelling. A Twitter user named Brandon Rosenblum -- based in Brooklyn, New York, according to his profile -- has been replying to Cowin's tweets with his own guesses. Several of his other guesses appear to be spot-on, and he guessed Haifley.

What's more, Cowin is aware (knows?) Rosenblum. She acknowledged him after he offered a guess for the first clue:

@brandonr glad to see you're guessing!

#4 clue #BNC25 Asian Salvation in NYC. A few of you guessers are guessing well! Keep it coming!

Who has guessed well so far? Rosenblum? He'd offered a guess for all three previous clues at that point, and Cowin had already acknowledged him.

I called the Tavern this evening, but neither Haifley nor the other partners in the restaurant were there.

Meanwhile, Eater, following the wordplay theme in the clues, goes with the Chicago restaurant Nightwood for "Midwest Morningtree".

That's it. That's my case. Feel free to laugh at me tomorrow if I'm wrong.