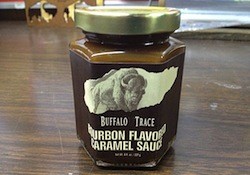 I ask so very little of the universe. Two things, really. Don't serve me desiccated calamari. And don't screw with my bourbon. This week already shattered one of my illusions. And then, for a moment this morning -- before the coffee kicked in -- I thought it had taken out the other as well.

The Buffalo Trace Distillery has issued a voluntary recall of...[exhales] several flavored sauces sold at its gift shop, at retail locations in numerous states (including Missouri and Illinois) and online.

Specifically, the gift shop at the Buffalo Trace Distillery has recalled its bourbon-flavored caramel and fudge sauces, meat marinade and regular and hot barbecue sauces. The issue is undeclared allergens: milk and soy in the caramel and fudge sauces; wheat, soy and anchovy in the marinade; and soy and anchovy in the barbecue sauces.

The FDA website has the specific UPC codes and best-by dates of the recalled products.

There have been no reports of consumer illnesses related to the recall, though my heart did seize for a second or two there.