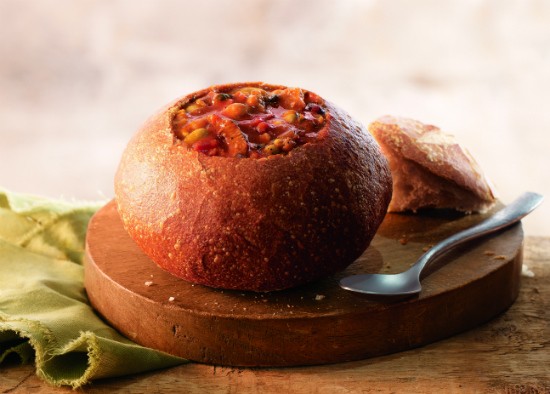 Today Panera Bread -- known locally as Saint Louis Bread Co. -- introduces a new menu item, the "Meal of Shared Responsibility," with no set price in all 48 of its bakery cafes in the St. Louis metropolitan area. The meal offers turkey chili in a sourdough bread bowl with choice of sides. Panera is testing the meal in St. Louis first, with no current plans to add it to menus elsewhere.

Kate Antonacci, director of societal-impact initiatives for Panera, says the meal is a way to extend the values and mission of the company's Panera Cares community cafes to every location in St. Louis. The first Panera Cares cafe opened in Clayton three years ago and has since expanded to include cafes in Boston, Chicago, Detroit and Portland. With the "Meal of Shared Responsibility," the company wants address hunger and food insecurity on a local level, offering a menu item that's accessible for all customers.

"We felt like they were really doing a lot of good and helping people who were in need. They were elevating the discussion about food insecurity, providing a vehicle for people to help one another in these communities," Antonacci says. "They were doing a lot of good, but we stepped back, and it's five cafes, five communities -- is there not a way that we can take the spirit of Panera Cares, this idea of offering people a hand-up, instilling this idea of paying it forward to your neighbor, is there not a way we can do that across our whole system?"

Enter the "Meal of Shared Responsibility" with three payment options. Customers can either buy the turkey chili in a sourdough bread bowl for the suggested price of $5.89, pay more than the suggested amount to help cover costs for others, or if they're in need, they can simply pay what they can.

When asked how Panera arrived at the turkey chili in a sourdough bread bowl dish for the "Meal of Shared Responsibility," Antonacci says the company wanted to offer a filling, self-contained meal that met nutrition needs. According to Antonacci, the meal includes 56 percent of the recommended daily value of fiber and 34 percent of recommended daily protein. The turkey chili itself is made with ground and diced turkey meat, garbanzo and kidney beans cooked in a turkey broth with tomatillos, corn, Pasilla negro and ancho chilies, cumin, edamame, diced onion, carrot, garlic and green chilies.

"If this was the only meal somebody was eating on any given day, we'd feel good about the fact that they were able to get it into their bellies," she says. "Combine it with the fact that it's in a bread bowl, which is quite large, and it comes with a side item -- baguette, bag of chips or an apple, just like any of our items would -- you're looking at a really delicious and wholesome meal."

Antonacci says the company's Panera Cares program has been very successful and well-received by the community in Clayton, and she hopes the same will be true for the "Meal of Shared Responsibility" in St. Louis bakery cafes.

"We felt like if there ever was a place that would allow us to try something like this, it would be St. Louis," she says. "I would just invite people to come in and try this, and to not to form any judgements about it until they experience it for themselves. Come in and see what it's all about. We know this isn't going to eradicate hunger in St. Louis, but we think it's a step in the right direction."