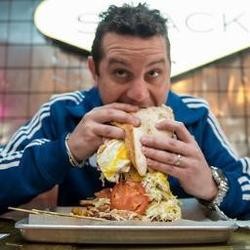 Post-Dispatch restaurant critic Evan Benn has submitted his resignation to the paper. Benn will move to Miami, where his wife, Teri, a physician, has taken a new position. Benn will return to the Miami Herald, where he worked before moving to St. Louis in 2009.

Benn's time at the Post-Dispatch has taken him from a temporary features-editor position to a full-time gig that included features editing as well as writing the "Hip Hops" beer column. In September of last year he succeeded Joe Bonwich as the restaurant critic.

(Personal Note: Benn isn't simply a peer, but a friend, so in the interest of journalistic objectivity, I won't mention that while I'm thrilled that he and his wife have these career opportunities, I'm bummed on my own behalf and on behalf of the city's food scene.)

I asked Benn to comment on the move. Here is what he e-mailed me:

When we moved here four years ago for my wife's medical residency, I had no idea what St. Louis held in store for me. The Post-Dispatch took a chance on me as a temporary features editor, for which I will be forever grateful. That gig morphed into a full-time position, and the paper handed me the keys to the beer column and restaurant reviews. To call it a dream job would be the understatement of the millennium.

Along the way, we fell in love with this city and the people who call it home -- the colleagues and friends and sources who welcomed us to do the same. Four years later, St. Louis sure feels like home, and it'll be difficult to say goodbye. Teri found a terrific career opportunity in Miami, which is ground zero for her medical specialty. And I feel beyond fortunate to be able to return to the Herald, which is where I started my career and is home to some of the best journalists in the country covering some of the biggest stories in the world.

I'm leaving one terrific newsroom and re-joining another. For a guy who knew at age 12 that all he wanted to do was be a newspaper reporter, this has been a wonderful ride that I hope doesn't stop anytime soon. We'll miss St. Louis and will leave here with fond memories and lifelong friends, all of whom are always welcome in our new home. It's funny how many more visitors you get when you live in a place like South Florida as opposed to one that gets thundersnow in late March.

Benn's final day will be Thursday, April 19. More on Benn's replacement as restaurant critic as Gut Check learns it.