Mohawked mixologist and Sanctuaria (4198 Manchester Avenue; 314-535-9700) bar manager Matt Seiter will be mixing drinks from his recently released book Sanctuaria: The Dive Bar of Cocktails: How We Rewrote the Rules and Recipes One Cocktail at a Time at Taste tonight from 5 to 7 p.m.

Seiter has already visited cities such as New Orleans and New York to promote the book, but this is the first St. Louis-based event since its release party at Sanctuaria in December.

This evening Seiter will be mixing up a handful of the 150 drink recipes listed in his book, including the "Ping Pong," with sloe gin, creme de violette and lemon ($6); "Diki Diki," with Calvados, Swedish punsch and grapefruit ($6); and the "St. Louis Southside" with gin, ginger liqueur, lemon, absinthe, club soda and mint ($8).

He will also be selling copies of the book and tells Gut Check that he will autograph copies if people ask him to, but admits, "I don't know how many people in town know that I even wrote a book."

Sanctuaria is closed on Mondays, and Seiter says he expects to see the bar's regular crew come out to Taste, and hopefully some newcomers as well.

Seiter tells us that writing a book has always been something on his bucket list. He never had enough content to compile into a book, though, until the introduction of Sanctuaria's Cocktail Club. With 150 different cocktail recipes to pen, Seiter says, "It's like, well shit, here we go." 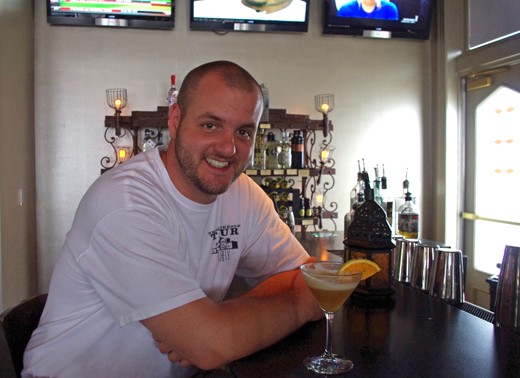 The first two chapters of the book chronicle the history of Sanctuaria, as well as its Cocktail Club. Sanctuaria's menu is organized much like a menu at a Chinese take-out joint -- each of the 150 drinks on the menu has a number. Chapter three lists the recipes and back-stories of drinks No. 81 through No. 150, which are Sanctuaria's original creations. Seiter is not shy about divulging his recipes. He says he has never been hesitant to instruct patrons on how to make his drinks. "We do that behind our bar," Seiter says. "Why not do it in print for a book?"

The fourth and final chapter of The Dive Bar of Cocktail Bars lists drinks No. 1 though No. 80, which are the classic cocktails served at Sanctuaria. Along with recipes, Seiter pored over countless cocktails books to collect a sort of bibliography for the classics. He collected several references for each drink, listing the exact book and page where he found certain recipes. Through his research, Seiter says, "I kinda came to the conclusion that there is no one correct recipe for any of these classics." Histories of cocktails are a dime a dozen, but, Seiter says, compiling references on each drink is something that hasn't yet been done in the cocktail book world.

As well as being available at Taste Monday night, Sanctuaria: The Dive Bar of Cocktails: How We Rewrote the Rules and Recipes One Cocktail at a Time is normally available for purchase at Sanctuaria.