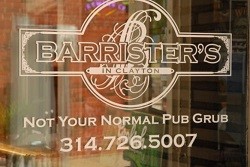 Clayton bar and grill Barrister's is relocating from its current site at 15 North Meramec Avenue and moving to a new location around the corner at 7923 Forsyth Boulevard. The restaurant will close its doors Sunday, March 31, and reopen at its new location the following week.

Adam Tilford, who owns the restaurant with his brother Jason, cites problems with the building's former owner as the reason why the restaurant is moving. Tilford says the owner was not putting in the money necessary to maintain the building: no mortgage, no bills, no maintenance. So when the building was foreclosed on and their lease was up, he says it was a good opportunity for a fresh start.

The new Barrister's will be smaller than the current one, but Tilford tells Gut Check that the space will actually be better suited for the restaurant. While the current site is narrow and "separated" (as Tilford puts it), the new space will "feel like one nice pub, kind of open and airy. Just more of the gathering place that we intended it to be."

Tilford says some menu changes are in the works. While the restaurants appetizers and burgers will stay the same, Tilford's chef brother is adding some fresh pasta dishes as well as more seafood to the menu. The new space will give Barrister's more space for beer taps, and the restaurant will be gradually increasing its tap count from ten to twenty. Tilford says to expect a lot of local beers, as well as a handful of some European brews.

Barrister's has built a reputation as a bar for soccer fans, and Tilford says the restaurant's regular fútbol fanatics will probably benefit from the new space, and the new layout will provide greater visibility to the restaurant's many TVs while retaining the European sports-bar feel.

The restaurant's new location on Forsyth puts it right next to the yet-to-open restaurant the Libertine. Tilford, along with chef Josh Galliano of the Libertine, says he hopes to build a "synergy" between the two restaurants. "We think we'll be able to play off each other really well," Tilford says. "I think with the two of us there we're going to make that area really exciting over the next few years."