Welcome to Girl Walks Into a Bar, a weekly Gut Check feature that spotlights local bars and bartenders. This week, Kaitlin Steinberg profiles Monica Schepis of the the Lobby Lounge at the Ritz-Carlton. Below is a Q&A with Schepis, followed by her own recipe for a Gooey Butter Cake Martini. 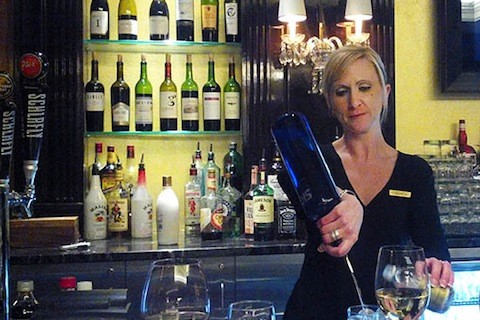 A recent $1 million renovation has the lobby looking better than ever -- and guests are noticing the improvement. According to Elaine Gamer, director of sales and marketing, the theme for the lobby lounge was "martinis and rhythm."

The "rhythm" part of that notion is expressed through the bright, dynamic artwork that has taken the place of the stuffy oil paintings that once hung in the lobby. The old carpeting was torn out and replaced with a lush blue-and-gold patterned carpet, and the ceilings were paneled with gold fabric to add a lightness to the area. The stiff, maroon, faux leather chairs are gone, and swanky velvet seats now give a club-like atmosphere to the lobby.

On Friday and Saturday evenings, a jazz band plays in an alcove in the lobby lounge, and visitors are encouraged to hit the dance floor to show off some moves. And after downing a few of the Ritz's 200-plus martinis, guests are more than eager to oblige.

That ample martini list is where bartender Monica Schepis comes in.

Schepis started her bartending career at a small neighborhood bar frequented by regulars looking for a cold beer and a friendly face. Eventually, she says, she decided to get a "big-girl job," but it turns out that wasn't for her. She went back to bartending, and she's now been at the Ritz-Carlton for more than seven years.

She's sweet and outgoing, but attentive to the rules that come with working for a corporate entity like the Ritz-Carlton. Behind that modest exterior, though, is a master mixologist. Schepis' claim to fame at the lobby lounge is her Gooey Butter Cake Martini, a drink she spent weeks perfecting.

"We're not allowed to drink on the job," says Schepis, "so I had to find hotel guests who were familiar with St. Louis and get them to taste it. Finally, people agreed it tasted like gooey butter cake."

No, seriously. It really does.

A girl walks into a bar and orders a _____. She has just earned your undying admiration. Scotch. I admire a female Scotch drinker. Especially if she picks something really good, like a nice Johnnie Walker Blue.

What is one thing that most people don't realize about crafting cocktails or bartending? I think a lot of people don't realize how much work goes into everything we do. There are so many ingredients and so many cocktails out there. Some people might think that you're a bartender or server because you're not as smart as somebody else, but really it takes amazing intelligence to be able to remember all these drinks and have them out as fast as you do.

Who would you most like to have a drink with? And why? I am a huge Grateful Dead fan, so if I could pick anybody, I would pick Jerry Garcia. I would love to just pick his brain about what some of the songs mean that I've loved for so many years.

What is the most bizarre or worst drink someone has ordered from you? The worst thing for me is when someone takes something really good and then puts a bunch of garbage in it. Like a nice Grand Marnier neat, and then I have to top it with orange juice. Stuff like that just kills me.

What's your favorite ingredient to use in cocktails? Right now, I'm a big fan of bitters and cucumbers. I love cucumbers, especially since we're coming up on the summertime. I think they give cocktails a great flavor. They're also great for infusing vodka. And then I love the aromatic bitters and how they enliven your senses to the smell of a cocktail. They just make a cocktail taste better.

What's your favorite drink? I'm boring. I'm a wino. I like a nice cabernet. Or in the summer, I like a Kendall-Jackson chardonnay. I know it's boring, but it's kind of like the lawyer who doesn't want to come home and practice law. I don't want to go home and make cocktails. It's easy to pop a cork and have a glass of wine.

Mix all ingredients with ice in a cocktail shaker and shake until cold and blended. Rim a martini glass with lemon juice, then dip in powdered sugar. Strain contents of shaker into martini glass and serve.