Visiting Wizard World's St. Louis Comic Con at America's Center this weekend? Here are some choice places to which to adjourn for victuals and libations -- all within easy walking distance of the con! 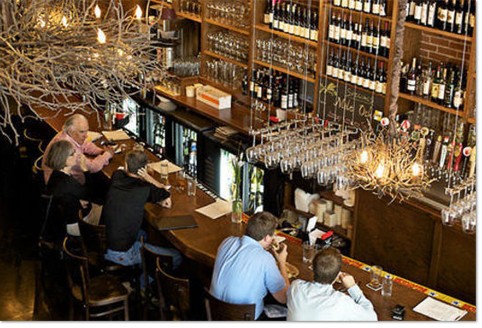 Bridge Tap House & Wine Bar (1004 Locust Street; 314-241-8141) Not long after it opened, Dave Bailey's downtown beer-pourium and wine bar earned RFT accolades for "Best Beer Selection in a Restaurant." But there's good eats here, though, from seasoned popcorn and spiced nuts to charcuterie and cheese, sandwiches, salads and small entrées. The beer list features well-known craft brewers on three dozen taps and in 200 bottles; the wine list, though not as extensive, offers value.

The Dubliner (1025 Washington Avenue; 314-421-4300) True, St. Paddy's Day is so last week. That just means there'll be room for you and your spandex-clad buds at the Dubliner. Ostensibly a "European gastropub," the place is, as you might expect, all Irish. Good grub, fine pub atmosphere.

Mango Peruvian Cuisine (1101 Lucas Avenue; 314-621-9993) This downtown location of chef Jorge Calvo's popular Shrewsbury eatery features a broad selection of traditional dishes that draw from Spanish and indigenous cuisine as well as Asian and Western European influences. That said, if you don't order ceviche, why are you here?

Prime 1000 (1000 Washington Avenue; 314-241-1000) The dry-aging chamber is a sign that Prime 1000 is serious about steaks, but its dual function as a design element -- even if you didn't know what it was, you would find it visually striking -- reveals this as a thoroughly modern restaurant, not merely one more stodgy cabernet-and-cigars steak house. Prime 1000 offers dry-aged, USDA Prime steaks and grass-fed steaks from Missouri.

Rooster (1104 Locust Street; 314-241-8118) A quaint crèpe joint operated by local restaurateur Dave "Midas Touch" Bailey (cf. Bridge Tap Room elsewhere on this list). Rooster serves up savory and sweet crèpes alike, from a menu that's bound to have something that'll set your mouth to watering. There are also soups, salads and sandwiches, not to mention Kaldi's coffee and ice cream from local purveyor Serendipity.

Wasabi Sushi Bar 1228 Washington Avenue; 314-421-3500 Dunno about you, but comic-book conventions always put us in the mood for sushi. Maybe that's because just about everything puts us in the mood for sushi. Along with the customary sushi offerings, other Japanese dishes are available, from tempura to teriyaki to udon noodle specialties. For $39.95 you can sit at the sushi bar and scarf down all the sushi you can handle, or go all out and pay Lee to prepare a multicourse meal around the notorious fugu, or blowfish.

Mosaic (1001 Washington Avenue; 314-621-6001) Small plates and good cocktails in a chichi setting. Definitely a destination to consider if you're out late and in a dressed in your superhero duds and in a see-and-be-seen kinda mood.

Over/Under Bar & Grill (911 Washington Avenue; 314-621-8881) This is where you go if you and/or your party are afflicted with both a comic-con jones and a March Madness, uh, madness. Expect three dozen high-def TV sets and SLU Billiken fans galore.

Robust (635 Washington Avenue; 314-287-6300) The brand-new downtown outpost of Webster Groves' favorite wine bar and small-plates joint. All the wine, all the small plates, none of the bored Webster ladies who lunch. Go for it!