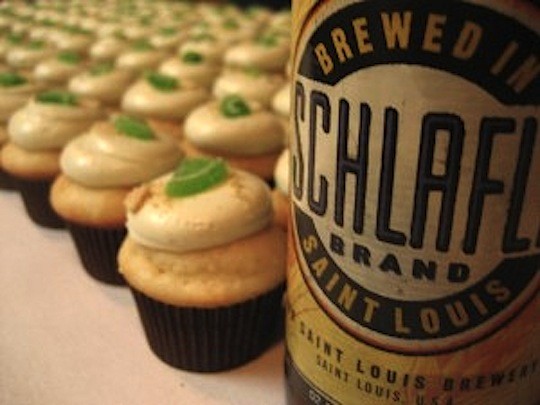 For $14 you get samplings of five beers and five bite-size cupcakes from Sarah's Cake Shop. The pairings for this annual event change every year, and this year they sound pretty tasty. You know, if you're into that sort of thing.

Pale ale is pretty standard brewery fare, and the Schlafly Pale Ale has a malted caramel flavor that oughta taste pretty good with an oatmeal-cookie cupcake.

Kölsch is a light, hoppy beer with a fruity kick, and Schlafly Oatmeal Stout is a rich, super dark beer with undertones of coffee beans, cocoa and dried fruit.

Schlafly's American IPA is a deep gold-colored seasonal offering (January-May) that's bitter and citrusy, and upon some investigation, we found that people often suggest pairing an IPA with something sweet and spicy like carrot cake. (Who knew?)

Rounding out the five samples is the Weizenbock, which is only available at select Schnucks as part of its Culinaria line. It's a fruity, spicy, amber-colored, unfiltered wheat beer that comes in a fancy bottle. And, sure, it sounds like it might be tasty with a caramel apple cupcake.

Oh, who are we kidding? We love beer, and we love cupcakes. They're all awesome together. Now if someone could make us a cupcake with beer in it, that would really be cause for celebration.

Tickets for the tasting are available at the Schlafly Tap Room, Schlafly Bottleworks and online.