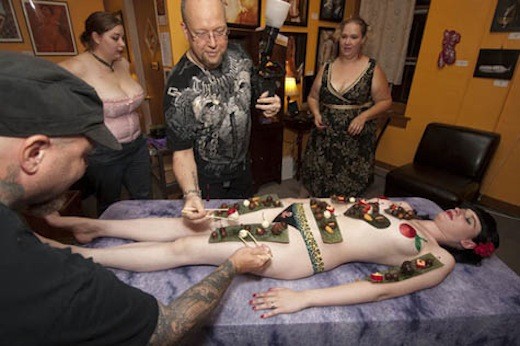 Update: (March 19, 10 a.m.) Gut Check has learned that Shameless Grounds has found a new location at the corner of Lemp and Withnell avenues in Benton Park. The Sidney Street shop will close on Friday, March 29, and the staff hopes to open the new place a week later.

Original post from March 4: The coffee shop famous for encouraging customers to love "outside the box" is being forced to look outside their own box these days.

After failing to come to an agreement with its current landlord at the Koken Art Factory, Shameless Grounds (2650 Sidney Street; 314-773-9900) is looking for a new place to move. The coffee shop will cease operations at its current location on Sunday, March 31, but until then the staff is encouraging your patronage, and they're asking for help from their fans.

Shameless Grounds announced the news on Saturday on its Facebook page, along with a call for help -- eventually: "Chances are good that we will be asking for help from friends, family, supporters and community at some point," writes owner Andrew Mueller. "If you want to help, we are more than happy to accept your help - but for the moment, we don't know exactly what you can do. We need to figure out our path forward before we can start trying to realize it."

Mueller tells Gut Check that he and his wife, Michelle, are currently scouting locations. They hope to have an announcement about where they will be moving in the next five to seven days.

Though Shameless Grounds' Facebook page notes the possibility of closing permanently if they cannot find a suitable location, fans seem more than willing to make it work.

"I'm keepin' my fingers crossed and lighting baby-fat candles," says one user, while another chimes in, "You have a lot of folks who stand behind you. We'd bring you business is (sic) you set up in a tent."

Perhaps the most comforting thought comes from another Facebook friend: "The furries are in your corner."

With fans like these and a (sex) positive attitude, Gut Check is confident Shameless Grounds will find a new locale in which to grind shamelessly. We'll let you know where they're headed as soon as we learn.