Like any good superhero, culinary or otherwise, toasted ravioli has quite the origin story.

Actually, it has several origin stories, none of which can be definitively proven or disproven. The most prevalent anecdote is that the St. Louis staple was invented in the 1940s when a chef accidentally dropped ravioli in hot oil instead of boiling water. This ostensibly took place at Angelo's Pasta House, which is now Charlie Gitto's on the Hill. Of course, the folks at Mama's on the Hill claim it originated there. Lombardo's is also famous for the dish, as is Rigazzi's.

The true history of toasted ravioli has been lost in the sands of time, but that doesn't make it any less tasty. Today is National Ravioli Day (we don't know what semi-influential figure declared it so, but God love him), and to celebrate, we've rounded up the best toasted ravioli in St. Louis. While citizens in lesser other cities mark this day of days by eating plain ol' boiled ravioli, here in the city where dreams are born, we will be feasting on t-ravs.

Here are our picks for best toasted-ravioli spots in town: 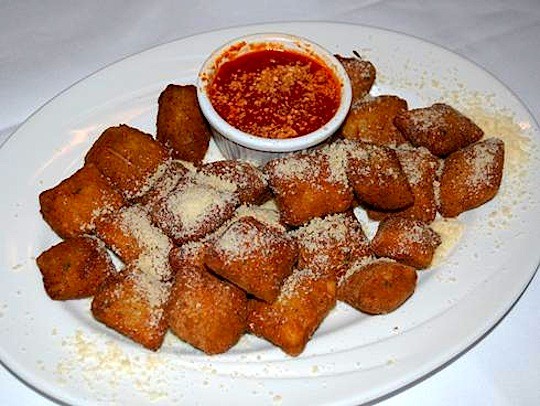 Charlie Gitto's (5226 Shaw Avenue; 314-772-8898) Of course the most widely accepted supposed birthplace of toasted ravioli is on the list. Charlie Gitto's stuffs its tiny ravioli with a mixture of meat, cheese and spinach, and the shells are fried to crispy perfection. Top that off with grated Parmesan, and you have a truly traditional plate of t-ravs worthy of the title "original." 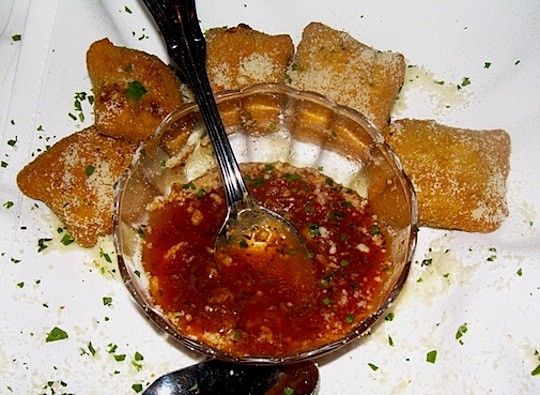 Kemoll's Italian Restaurant (211 North Broadway; 314-421-0555) The recipe for Kemoll's toasted ravioli has been passed down for several generations, making its recipe older than the invention of toasted ravioli itself. Whatever. All that matters is it's super-tasty. Last we heard, 80-year-old former Kemoll's employee Martella Grigsby was still coming in just to make the ravioli -- a job she has spent years perfecting.

Lombardo's Trattoria (201 South 20th Street; 314-621-0666) Lombardo's ravioli are extra large and crescent-shaped, which makes them stand out from other iterations. They're also thicker than the average raviolo -- a point of doughy pride for Lombardo's -- and topped with grated Romano, as opposed to the more traditional Parmesan.

Mama's on the Hill (2132 Edwards Street; 314-776-3100) Mama's has its own t-rav origin story that goes like this: "In the early 1940s, a chef by the name of Fritz accidentally dropped an order of ravioli into hot oil instead of hot water. Quickly realizing his mistake, the raviolis were removed but not discarded. With some seasoning, everyone agreed that toasted ravioli was a hit and there to stay." OK, so it's pretty much the same as every other invention story. Regardless, Mama's ravioli are crisp and delish. 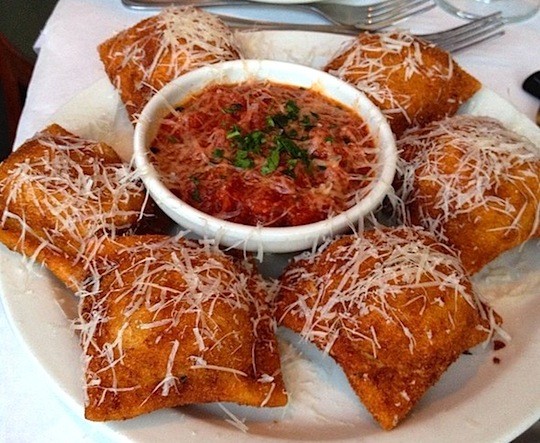 Trattoria Marcella (3600 Watson Road; 314-352-7706) These ravioli are huge -- giant pillows of pasta stuffed with a blend of beef, veal, pork, spinach, onions and carrots, and they're served with a super-thick and chunky marinara sauce. This isn't an appetizer -- it's a hearty meal. But that doesn't mean you can't order seconds.