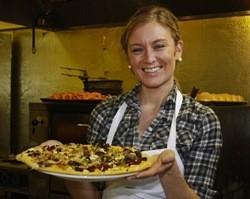 Katie Lee of Katie's Pizzeria Café (6611 Clayton Road, Clayton; 314-727-8585) told us in January about her plans for a new venture, Katie's Pizza & Pasta. The new restaurant, she said, will be "an artisan Italian restaurant with an open kitchen, a wood-burning oven [and] some cool new techniques with pasta."

Lee also announced a Kickstarter campaign to support the venture. Though she already had independent investors on board, she hoped to raise $40,000 from supporters.

Her hopes were well founded.

The campaign crossed the magic $40,000 line Wednesday evening, a little under two days before its expiration date. (Per Kickstarter's rules of operation, a campaign doesn't receive any pledged money unless it meets its stated goal.)

"We're very excited," Lee tells Gut Check. "We were nervous. We weren't sure we were going to hit it. The last couple of days, it went crazy."

Lee says she plans to sign a lease on a space for Katie's Pizza & Pasta as soon as next week. She also reveals that the Kickstarter campaign had some unintended benefits: "We got so much exposure that we got traditional investors from it. The last thirty days, we've been meeting with some amazing people who have become investors in the project.