A two-year investigation into illegal fishing and harvesting of paddlefish eggs in southwestern Missouri ended this week with citations and charges filed against more than 100 people. The suspects include eight men who face federal charges in connection with their alleged efforts to transport paddlefish "caviar" out of Missouri in violation of state and U.S. laws.

Authorities say tipsters first alerted them to suspicious activity along the Osage River near the town of Warsaw, known as the "Paddlefish Capital of the World."

Seven of the eight men facing federal charges reside out of state. They include five men from the Denver area of Colorado: Arkadiy Lvovskiy, Dmitri Elitchev, Artour Magdessian, Felix Baravik and Andrew Praskovsky (the latter of whom was caught trying to export paddlefish caviar overseas). The two other out-of-state suspects are Petr Babenko of New Jersey and Fedor Pakhnyuk of Chicago. Pakhnyuk stands accused of attempting to form an enterprise with other individuals who would market processed paddlefish caviar at markets in Chicago.

The eighth federal suspect, Bogdan Nahapetyan, lives at the Lake of the Ozarks. Court records reveal that he pleaded guilty of violating Missouri wildlife codes in 2009.

Black-market caviar and a bunch of guys with Eastern European names. Has the Russian mafia found its way to the Ozarks? 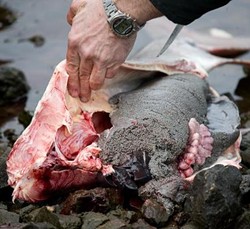 Joe Jerek, a spokesman for the Missouri Department of Conservation, tells Gut Check that he and others privy to the facts cannot discuss a lot of the details at this time. What he can say, though, is that the investigation into paddlefish poaching was one of the largest in the history of the conservation department -- involving approximately 85 state conservation agents and 40 special agents of the U.S. Fish and Wildlife Service. On Wednesday and Thursday those investigators issued arrest warrants and citations to more than 100 people.

Those not charged with federal crimes stand accused of violating state wildlife codes regarding the illegal harvesting of paddlefish.

"We are not picking on poor guys who didn't know they needed a permit or was caught with a fish that was too small," says Jerek. "These weren't accidental, 'oops, I didn't know' suspects. They knew they were violating the law."

Missouri allows sport fishermen to harvest two paddlefish a day and stipulates that eggs from those fish cannot be bought, sold or offered for sale. The exception is paddlefish on the Mississippi River. There the prehistoric fish may be fished commercially and its eggs bought and sold. Related content: "Something Fishy: A bubbling demand for Missouri caviar spawns cutthroat competition

Paddlefish (also known as spoonbill) can grow to 160 pounds, and a sole female can yield up to 25 pounds of eggs alone. In recent years eggs from paddlefish have caught on as a popular alternative to traditional caviar that comes from the overfished beluga sturgeon of the Caspian Sea. Prices for the paddlefish caviar goes for around $13 an ounce.