To get everyone in the St. Patrick's Day spirit, here's an Irish poem about drinking:

Some Guinness was spilled on the barroom floor when the pub was shut for the night. Out of his hole crept a wee brown mouse and stood in the pale moonlight. He lapped up the frothy brew from the floor, then back on his haunches he sat. And all night long you could hear him roar, "Bring on the goddamn cat!" 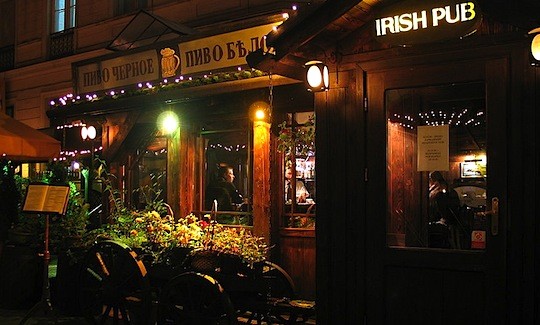 We don't know who wrote it or when it was written, but we can relate. Celebrating Irishness with Guinness and Jameson makes us feel mighty, too. And when Gut Check needs a drop of liquid courage or when we feel like tapping our toes to an Irish jig, we know that St. Louis' Irish pubs will be there to whisk us away to the Emerald Isle.

Here are our picks for the best Irish pubs in town: 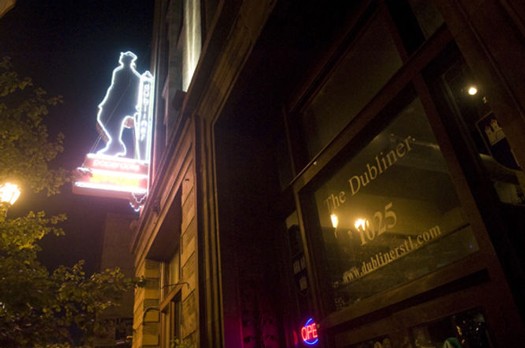 The Dubliner (1025 Washington Avenue; 314-421-4300) The Dubliner calls itself a "European gastropub," but the food and drink menus are totally Irish. The décor is all dark wood, but there's a nice mix of open space and intimate booths to suit any level of privacy. There's also a loft overlooking the first floor for your people-watching pleasure. Perhaps the best thing about the Dubliner, though, is what it often advertises as the soup of the day: whiskey.

Helen Fitzgerald's (3650 South Lindbergh Boulevard, Sunset Hills; 314-984-0026) Helen Fitzgerald's is not merely an Irish bar: It also houses a trivia night, beer-pong tournament, karaoke, open-mic night, DJs and live music. The menu features a variety of Irish favorites including corned beef and cabbage, and Irish stew, but the bar also offers pizza, wings and quesadillas. With flat-screen TVs, dartboards and banquet rooms, it's less an Irish bar than it is a playground. And we're definitely OK with that.

John D. McGurk's Irish Pub and Garden (1200 Russell Boulevard; 314-776-8309) McGurk's has been a St. Louis Irish fixture since 1978, when it was a one-room pub house. Since then, it has expanded into nearly 20,000 feet of Irish good times. It was named one of the "Best Bars in America" by Esquire magazine in 2012 (the only one in St. Louis!), and it has gen-yew-ine Irish musicians every night of the week, ranging from rowdy sing-alongs to traditional reels and jigs played by master folk musicians.

Molly Darcys (26 North Meramec Avenue, Clayton; 314-863-8400) Part of the historic, Tudor revival-styled Seven Gables Inn in downtown Clayton and with roots in the Irish city of Killarney, Molly Darcys is an Irish-themed pub serving up drinks and food in the fashion of the isles. The fare found in this cozy pub blends familiar pub food with a few modern, and even local, touches and flavors. Molly Darcys features live Irish music on Friday nights and a list of beers and whiskeys to go with each tune.

Nick's Irish Pub (6001 Manchester Avenue; 314-781-7806) St. Louis might have more Irish pubs than there are shamrocks in a glen, but many of them are not open after 1:30 a.m. That's what separates Nick's from the rest. It's a pub the way pubs are meant to be: cheap beer, cheap bar food and plenty of drunken fools banging mugs on the table to the beat of local musicians playing traditional Irish tunes late at night.

O'Connells Pub (4652 Shaw Avenue; 314-773-6600) Open since 1962, O'Connell's is known for making a mean burger. It's housed in an Anheuser-Busch building built in 1905, and like the building and the whiskey, the furniture and decorations are well-aged. The beer selection is minimal, and the evening crowd is rowdy as a bunch of sailors. But the burgers are heavenly, and the Jameson shots are ginormous. What more could you ask for?

O'Malley's Irish Pub (1900 Cherokee Street; 314-762-9308) O'Malley's describes itself as "your neighborhood corner bar," and that kind of familiarity is what makes it great. There's a roaring fireplace with a decorated mantel and a large Guinness mirror hanging above it. Live Irish and contemporary music every Friday and Saturday night brings this pub out of St. Louis and straight into the heart of Dublin. Especially if you have several pints and forget where you are.

Pat's Bar and Grill (6400 Oakland Avenue; 314-647-6553) The founder of Pat's, Patrick Connolly, was originally from County Galway, Ireland, and he settled in Dogtown and opened Pat's in 1942. Over the decades, the venerable bar-and-grill has mastered the classic Irish pub formula: a down-to-earth atmosphere, friendly service, cold Guinness on tap and a solid menu, which includes not only a number of traditional Irish meat-and-potatoes entrees but also a smorgasbord of deep-fried fare.

Seamus McDaniel's (1208 Tamm Avenue; 314-645-6337) A Dogtown stalwart, this neighborhood pub is known for its burgers, Buffalo wings and extensive beer selection. Rich mahogany paneling adorns the walls throughout the restaurant, making it a comfortable place to throw back a few or watch a game. Seamus McDaniel's is a centerpiece of Dogtown's strong Irish identity.

Tigín Irish Pub & Restaurant (333 Washington Avenue; 314-241-8666) "Tigín" is a Gaelic word for small cottage, and that's the kind of atmosphere you'll find at this pub. According to the website, "Ancient Irish Law dictated hosts had to provide food, drink, a warm bed if possible, and entertainment." While there aren't any warm beds at the bar (that we know of), there is definitely plenty of food, drink and entertainment. Tigín does its Irish food fancy-like, and it has a whiskey and scotch menu to rival a liquor store.