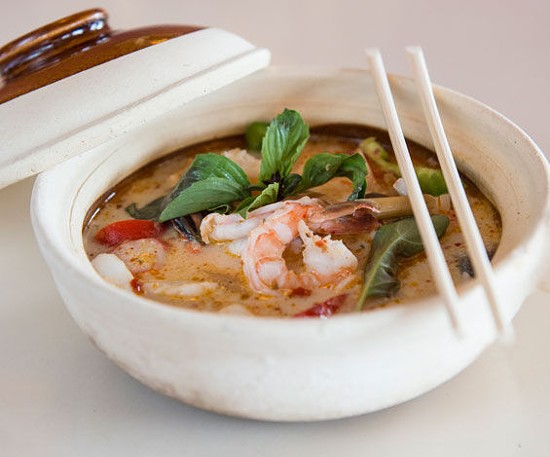 When I visited Ocha Thai & Japanese Cuisine (12967 Olive Boulevard, west St. Louis County; 314-434-3455) for the first time late last year, its name was House of Thai. The sign above the entrance still read Tachibana, the Japanese restaurant that had occupied this west-county strip-mall location for several years. New owners had taken over Tachibana in the spring of 2012. By September they'd transformed it into House of Thai, which (of course) served Thai cuisine but also some Japanese fare, too.

My head reeled. I just wanted some curry. Red, green. I didn't care.

I ordered a red curry, with chicken. It was decent, if blunt in its coconut-milk sweetness. A typical curry in an American Thai restaurant, in other words. My forehead dampened at the default "hot" setting, though. It wasn't Thai-hot hot, but it surpassed don't-scare-away-the-gringos hot. Encouraged, I made plans to return.

If I'd paid closer attention to that banner, my head would have reeled again.