Caseyville Cafe to be Featured on "Restaurant Impossible" 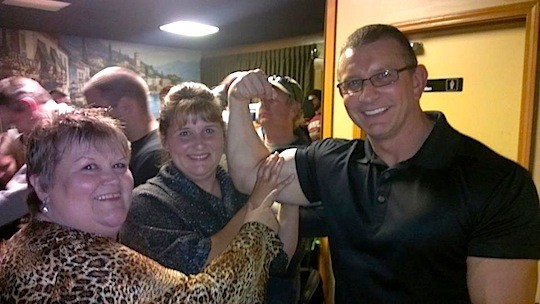 The Caseyville Cafe (421 South Main Street, Caseyville, Illinois; 618-343-0911) underwent a major renovation in November as part of the reality restaurant makeover show Restaurant Impossible. The fruits of the show's labor will appear on television this Wednesday, March 13, at 9 p.m. on the Food Network.

Restaurant Impossible swoops in when a restaurant is in financial trouble and gives it a food, decor and staff makeover courtesy of British restauranteur Robert Irvine and a team from HGTV. The group has two days and $10,000 to revamp an "impossible" restaurant completely and get it flourishing once again.

Caseyville Café co-owner Diane Emery (her daughter Robin Beard Gordon is also a co-owner) contacted the Food Network show because, as she tells Gut Check, "We've always had a reputation for really good food, but we'd developed a reputation for lousy service. The minute my daughter and I went out the door, the servers just did whatever they wanted."

One evening Emery, a weekly watcher of Restaurant Impossible herself, went to the show's website and began filling out an application to be featured on the show.

"I didn't really think I'd hear from them," Emery says, "but a week later, a producer called and asked if she could send someone to check it out. A producer came and spent five hours here. She took the employees into the office one-by-one, to talk to them without me there and took lots of photos."

Emery was told that if she didn't hear from Restaurant Impossible producers after a few months, she should call them and remind them. She got back to work focusing on improving her restaurant, but a week later, a producer called and said the Food Network executives loved the Caseyville Café.

"And everything happened realty quick after that," Emery says.

The episode guide on foodnetwork.com lists the following synopsis of the upcoming show:

Chef Robert Irvine quickly sees why the Caseyville Café in Caseyville, Ill., is failing: From the kitchen to the servers, the staff have completely overrun Diane and Robin's restaurant, costing this Mother-Daughter team tens of thousands of dollars -- and their relationship. Robert can only help Diane and Robin fix the menu and décor of the restaurant once he gives the staff an ultimatum: decide who's in and who's out, or else Robert leaves and the mission is over.

The TV crew was a big presence in the small Illinois town during the duration of the filming. Staffers set up a tent in the parking lot for the crew, and large vans delivered food to the group three times a day. Once people found out that a TV show was being filmed in town, the police had to direct the influx of traffic.

A major presence in the café during the filming was Restaurant Impossible host Robert Irvine.

"Robert was tough, let me tell you!" Emery says. "He does not mind telling you what he thinks. But after that, he settled down, and he said 'We're gonna turn it around. This place is a gold mine. This is what you have to do.'"

Emery was also impressed with Irvine's chef, Lee Lucier, who comes to all the "impossible" restaurants to help out, but doesn't make it on camera. Lucier took control of the kitchen staff and reconfigured the kitchen area to make it more functional.

The show, which claims to have a budget of $10,000 for the renovations, made an extra splurge for the Caseyville Café.

"I had a commercial stove that was probably 50 years old," says Emery, "And Robert bought us a new $5,000 dollar stove. He's never done that on the show before. I got the feeling that he really, honestly wants this café to make it."

Because the restaurant has been open again since the filming wrapped, guests have already seen the restaurant redecoration. Light blue walls, wood floors and modern light fixtures brightened the formerly dark drab interior.

Upon seeing the reveal, Emery says she broke down in tears. The redecoration, along with the advice from Irvine about everything from menu to bookkeeping, has allowed her to stay open and continue feeding the people of Caseyville. Now, she hopes the publicity from the TV show will bring in a new wave of guests to the cafe.

"They say after the show airs, we'll be really, really busy," Emery says, laughing. "But we are ready!"

The Caseyville Cafe episode of Restaurant Impossible first airs March 13, but if you miss it, it will be airing again March 14 at 12 a.m. and March 23 at 2 p.m.