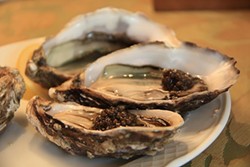 Vin de Set (2017 Chouteau Avenue; 314-241-8989) hosts its fifth annual Oysters Five Ways Festival at 4 p.m. on Sunday, March 10. The restaurant has flown in 1,400 Penn Cove Pacific oysters, and head chef and general manager Ivy Magruder tells Gut Check he and his kitchen staff are armed and ready to shuck the night away.

Magruder says Vin de Set purposely bought only enough oysters to serve during Sunday's festival, so get 'em then or not at all.

"We got 'em in our back door [Thursday]," Magruder says. "They were in the water on Monday; it just doesn't get any cooler than that."

If the name of the festival didn't give it away, Vin de Set will serve oysters five different ways:

Magruder says he and his staff couldn't wait until Sunday to taste the oysters.

"They're phenomenal, these are so sweet and fantastic," he says. "They're just like watermelon, they're very sweet."

No taste for oysters? No problem. Magruder says Vin de Set's regular menu will still be available, and admitted that his wife cannot stand the stuff.

This festival is an offshoot of Schlafly's annual Stout and Oyster Festival, and the restaurant will have a selection of Schlafly's stout beers, such as its Coffee Stout, Nitro Irish Stout and Oatmeal Stout for sale.

Magruder says the 1,400 oysters the restaurant had flown in specifically for the festival are just a small "nugget" of what Schlafly has brought in for its celebration: Penn Cove Shellfish dedicated an entire cove to the brewery's event and have begun delivering approximately 36,000 oysters to Schlafly Tap Room (2100 Locust Street; 314-241-2337).

Oysters are not a regular feature of Vin De Set's menu, so Magruder says it's a rare treat to have so many delivered fresh to their doorstep.

"I am pumped," he says. "How crazy to be in St. Louis and to have oysters this fresh. This is something that, economically, we can't do all the time."

Magruder says that the fifth time around, he expects to see some familiar faces. He says the restaurant has had some "seasoned vets" come every year so far -- and they always bring more friends to the next one.

Reservations for Sunday night are filling up fast, but Magruder tells us the restaurant still has a little wiggle room for last-minute participants to nab a spot. The restaurant will start serving the oysters at 4 p.m. until they run out.