With the craft beer scene exploding across the Midwest and the recent opening of the beer emporium Flying Saucer (stay tuned for a first look), it has never been a better time to be a malt lover in St. Louis. As such, we thought we'd take this opportunity to revisit the best craft and microbreweries in this town built by beer.

Page through to see the finalists that we've nominated -- as well as our current top pick -- for "Best Craft Beer Maker" in 2013.

Civil Life Brewing Company (3714 Holt Avenue) The master brewers at Civil Life are all about nuance and subtlety in their brews. Jake Hafner and Dylan Mosely opened The Civil Life Brewing Company together in 2011 with an emphasis on craft. They specialize in session beers (reasonable alcohol by volume, for those not up on the jargon) like a terrific American brown ale and traditional British bitter. They write about each beer they produce in great detail on their website with the notion that these days, people don't know enough about what goes in to making a tasty pint.

Exit 6 Pub and Brewery (5505 Highway N, St Charles; 636-244-4343) Located in St. Charles, the Exit 6 "nanobrewery" is somewhat off the beaten path for St. Louis beer devotees, but it's well worth the drive. Jeff Britton, a devout homebrewer, opened Exit 6 in the summer of 2011 as a place for people to come drink beer from all over, as well as try the five beers made in-house. Britton has a creative side that comes out in his house brews like Iced Oatmeal Cookie (it seriously tastes like a cookie) and Razmanian Devil (flavored with raspberries and jalapeños). Their tap line changes seasonally, so check the site if there's something specific you're dying to try. We recommend all of them, though.

Perennial Artisan Ales (8125 Michigan Avenue; 314-631-7300) Owner and Brewmaster Phil Wymore opened Perennial in 2011 after relocating from Chicago with the intent of brewing beer for the adventurous drinker. Perennial's beers are influenced largely by Belgian and American craft styles, but Wymore likes to mix it up by adding fruit, spices or even tea to his brews. Try the "Saison de Lis," a Belgian-style saison brewed with chamomile flowers in honor of Wymore's daughter or the seasonal "Peace Offering" made with maple roasted butternut squash from Yellowtree Farm. 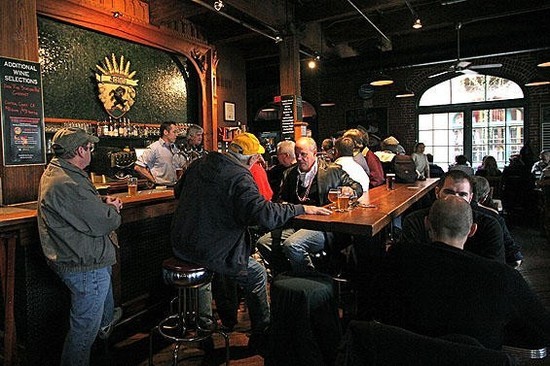 Schlafly Taproom (2100 Locust Street; 314-241-2337) No St. Louis craft beer list would be complete without a nod to Schlafly. Heck, they're on this list for their Pumpkin Ale alone. But the 21-year-old company stepped up to the plate from the day they opened (the first new brewpub to open in Missouri since Prohibition) and pretty much all of the beers they've developed in that time are winners. Because Schlafly is larger than other craft breweries in St. Louis, they're able to brew around 50 different styles of beer, assuring that there's a favorite in there for everyone. Some of their special brews are only available on tap at the Schlafly Tap Room, which makes them even more special and exciting.

Urban Chestnut Brewing Company (3229 Washington Avenue; 314-222-0143) Urban Chestnut calls itself "the home of beer divergency." Apparently this motto has something to do with tradition yet lack of convention. We're not sure. All we know is UC's beer is damn tasty. The brewery opened in 2011 at the helm of Florian Kuplent and David Wolfe, both former employees of Anheuser-Busch. They pay homage to their "new world meets old world" philosophy by producing two beer series: Revolution (modern American style) and Reverence (timeless European style). Our favorites are the "Winged Nut," a chestnut-based brew, and Schnickelfritz, an unexpectedly fruity, spicy Bavarian-inspired beer.

And the best local craft beer maker is...

4 Hands Brewing Company (1220 South Eightth Street; 314-436-1559) Where to begin? The quality of 4 Hands barrel-aged brews is impeccable, and each brings something unique to the 4 Hands repertoire. Kevin Lemp opened the brewery in 2011 after years of experience with E&J Gallo winery. The same attention to detail that goes into wine making is evident in 4 Hands' flavor combinations and innovative methods. "No Place Like Home" features a double red aged in Cabernet wine barrels for 6 months, while "Contact High" is made by adding pacific northwest hops and dry hopping with orange zest to create a light, summery beer that, according to the website, pairs well with...lawn mower. Oh, who are we kidding? These beers pair well with almost everything, especially our mouths.