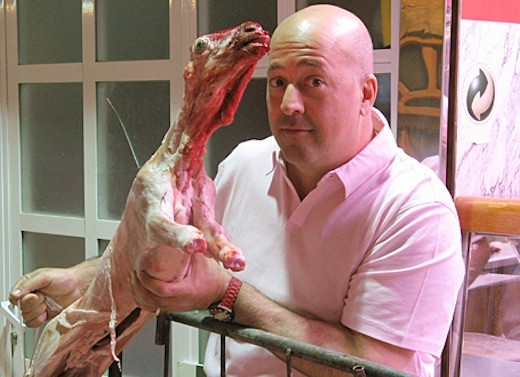 We first reported that Bizarre Foods America was filming at the market back in February, but after finalizing plans with Travel Channel bigwigs, Soulard Farmers Market was able to announce the date yesterday.

The market's website notes that Zimmern will film there from the early morning through the early afternoon, so if you do head out there, expect a crowd. And expect some weird food.

In anticipation of the event, the market is pulling out all the crazy stops, at least according to a post on its Facebook page yesterday -- "You just might be seeing some brains around Soulard the next couple of weeks." -- accompanied by a link to a page from Zimmern's website in which he focuses on the culinary delight that is brains.

No word yet from Zimmern or the Travel Channel regarding which vendors Zimmern might visit, but we'll update you as we learn more. We anticipate a visit to Frandeka's Soulard Fish Meat Feed & Pet Shop (yes, that's how they write their name...with "pet" tacked on at the end...) for some exotic animal meat. What do you think Zimmern will try at Soulard Farmers Market?