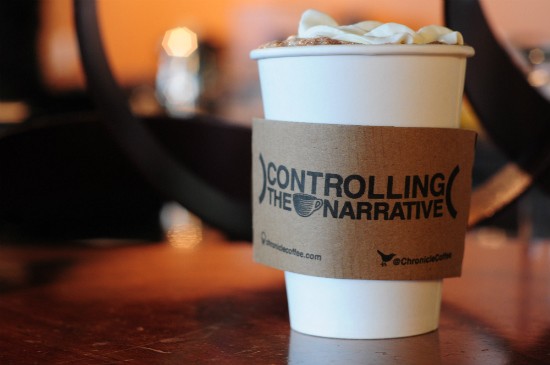 Sitting on the former site of the Blumeyer Housing Project -- St. Louis' last housing project dedicated to families -- Chronicle Coffee (1235 Blumeyer Street; 314-534-0524) aims to revitalize the area in a way the housing project never could. The shop, which opened on February 22, serves coffee, smoothies, pastries, soups and sandwiches to the North Grand community.

"Controlling the narrative" serves as the coffee shop's motto, and it's emblazoned on every cardboard sleeve that shields customers' delicate hands from their piping hot to-go cups of coffee.

"Controlling the narrative, for me, is the new 'Just do it,'" owner Jason Wilson explains. By providing a space for local groups and organizations to meet, as well as having a staff largely made up of locals, Wilson wants his coffee shop to serve not just his community's caffeine needs, but their social and economic needs as well. He wants to control the reputation the area has received -- and start to change people's minds about its economic viability. 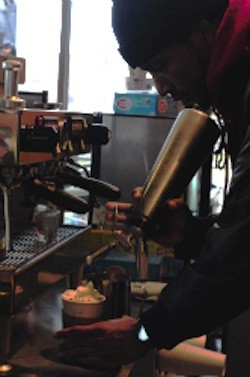 Wilson hopes that by starting a business in a downtrodden area, he will re-energize North Grand Center, and he expects his business to encourage other business owners to set up shop in the area.

"There aren't a lot of companies coming down here to this community, obviously," Wilson says. "But they should. There's a massive amount of infrastructure available here. There's no reason why in the world that we don't have more people building businesses here. "

So Wilson decided he'd be the first. Never an avid coffee-drinker, Wilson instead appreciates coffee for the conversations it creates, and the coffee shop for the community it builds. In December 2012, Wilson acquired St. Louis-based Northwest Coffee Roasting Company while already in the process of opening Chronicle, his first restaurant endeavor. For now, Chronicle serves Northwest Coffee, but Wilson said he is developing his own roast for Chronicle.

The coffee drinks at Chronicle range from the simple ($1.70 for a good ol' fashioned cup of joe) to fancy, multi-ingredient espresso drinks such as the "Raspberry Bianca," swirling with raspberry, espresso and white chocolate ($3.55 for a small) and the "Carmocha" with caramel and chocolate steamed milk ($3.55 for a small).

Non-coffee drinkers can get their boost from Chronicle's selection of smoothies. The "Bee Smoothie" boasts peach, bananas, mango and orange juice with a special "bee pollen" supplement, while the "Muscle Pumper" contains mangos, bananas, pineapple, strawberry and apple juice pumped up with a creatine supplement (both $4.45 for a small).

The shop has breakfast and lunch menus as well as an array of pastries. Wilson prides himself on the use of fresh eggs for every breakfast item, and egg-based dishes abound on the menu. These include the "Egg Rick Muffin" ($5.55), "Burrito Fresco" ($4.45) and the three-egg sandwich ($5.45), all made to order.

Wilson admits that while the preparation time for these dishes may slow down the busy commuter, his food is definitely something worth slowing down for. Of Starbucks, Wilson says, "They're all about grab and go. We're grab and kinda wait for a second, and then go. We're like, 'Slow down for a second, we're going to make you a good egg.'" 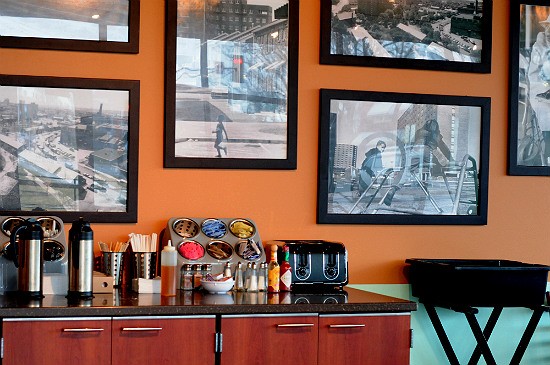 Wilson is in the process of building an internship program with Beaumont Career and Technical Education High School. He wants to take local high-school kids under his wing and teach them the nuances of the coffee business. In exchange, the high school has made pastries for Chronicle as part of its culinary-arts program. Once things are up and running with Beaumont, Wilson intends to expand the program to include other high schools in the area.

The freshly painted walls of Chronicle are decorated with old photos of St. Louis and Blumeyer, culled from the archives of the Post-Dispatch. By prominently featuring the photos of Blumeyer, Wilson wants to ensure that the memory of what the area used to be is not forgotten. He gestures to the photo wall as he says he believes that Chronicle will be another chapter in the history of the North Grand Center. Hence the name "Chronicle."

One of Wilson's goals for opening a business was to provide a boost for an area previously overlooked. He says he was often asked why he would choose to locate his business on the site of the former Blumeyer.

Revitalization was another of Wilson's goals, and he's doing that by providing jobs in the area. The majority of Wilson's seventeen employees are local people; by providing job opportunities to residents, he says "you would end lot of the problems that we have when it comes to homelessness, violence, gun violence, broken families; all the things that go along with just being poor and at the margins. I don't think we could do it all though coffee, but it's a good damn start."

Chronicle Coffee is his "good damn start," but Wilson says he wants to eventually expand the Chronicle brand to "every blighted area, every city, in communities where people are willing to support the resources that are there."

Chronicle holds lofty goals for its future, but for now, Gut Check believes that a cup of joe from Chronicle is at least a good damn start to any morning.