This is part one of Gut Check's Chef's Choice profile of Rick Lewis of Quincy Street Bistro. Part two, a Q&A with Lewis, will be published Wednesday, and part three, a recipe from Lewis, will be available on Thursday. 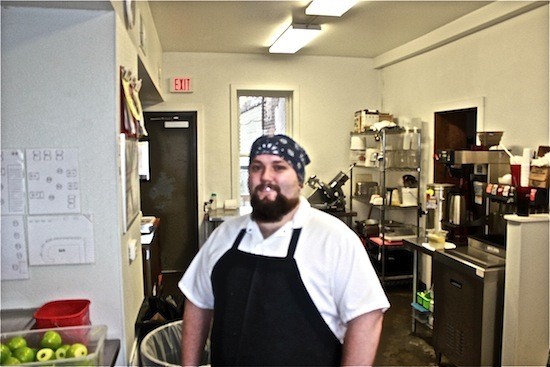 The KitchenAid and Vita-Prep mixers in the restaurant's kitchen also belong to Lewis. They aren't pieces of junk. They are gifts from his wedding last September. And they are integral to his idea of what two-year-old Quincy Street Bistro can -- and should -- become.

When Lewis first arrived at the the restaurant, he explains, "They weren't set up for doing everything from scratch."

"The fact is," he continues, "you can do bar food and comfort food, and you can buy it out of a box all day long, but to do it the old-school way -- actually prepare everything, make your stocks for your gravies, the whole bit -- it brings a whole other kind of dynamic to it.

"We're not trying to reinvent the wheel here by any means. We want to give the people good, legitimate home-cooking like their grandmother would have made. It's just a little harder on the restaurant scale."

Lewis had practical reasons to bring his fancy wedding gifts into Quincy Street's kitchen, but there was also a kind of poetry to his decision. Not only is his wife, Elise, a manager and bartender at the restaurant, but her parents, Mike and Sue Enright, are its owners.

"They wanted comfort food bar and grill from the get-go -- before I was ever in the picture," Lewis says. "I felt like they had a lot of that, but it wasn't focused."

Lewis cut the menu by half. Most of the dishes that made the cut he radically transformed.

"That was the one hurdle [the Enrights] were scared of: me cutting the menu in half," he says. He told them, "'I guarantee you're going to see a difference -- the people's enjoyment in coming here, the bills, everything -- when we change this.'

"We took the comfort-food section [of the original menu], and we took some of the other items, and we dialed them up a little bit to make them a little nicer, and we started doing everything from scratch."

The transition did hit a few bumps. Lewis laughs as he remembers the green-bean incident: "They were using frozen green beans. We started purchasing fresh green beans and cooking them. The first week of doing that, everybody said, 'These green beans are stringy and tough.'

"I like a little bit of a snap to them still. They weren't overcooked."

He sighs. "So we started intentionally overcooking our green beans a little bit and then -- " he pauses to offer a wicked smile " -- we gradually started to cook them the way they should be cooked." 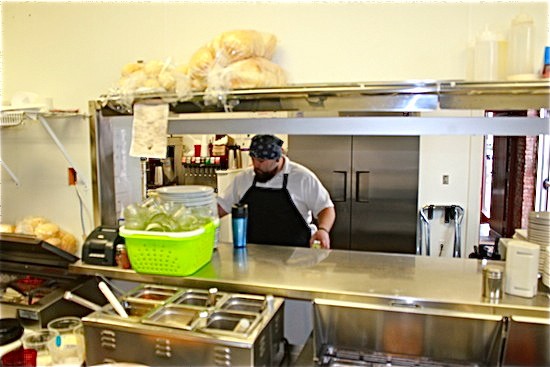 "My mom was a really good cook," he says. He singles out her fried chicken for special praise. "It wasn't your traditional quarters of fried chicken; it was breast meat. She soaked it in buttermilk and pan-fried it, and it was really good."

(Lewis takes a similar approach with Quincy Street's fried chicken: brining it, soaking it in buttermilk and pan-frying it. It is also really good.)

"My grandmother on my dad's side came from southeast Missouri and ate things like possum," he says. "My dad tried really hard so that we would not have to do things like that, and he succeeded very well at that, so he finds it amazing when I want to go out into the woods and go hunting."

Lewis fell into the restaurant business as a teenager. "I didn't have clear direction," he admits. "I wasn't the most focused kid."

He worked for several years at Dulany's Grill & Pub in south county. From there he went to LoRusso's Cucina in south city.

"I kept wanting to learn more," he says, "to acquire more knowledge."

He landed a position at An American Place, the late downtown restaurant that was unlike anything else in St. Louis when it opened in late 2004. A venture from celebrity chef Larry Forgione, An American Place was unabashedly cosmopolitan in its look and prices. More importantly, it emphasized local produce before anyone had heard the term "locavore".

An American Place was also a hothouse for talented young cooks, including the refugee from Hurricane Katrina who became its chef de cuisine, Josh Galliano. 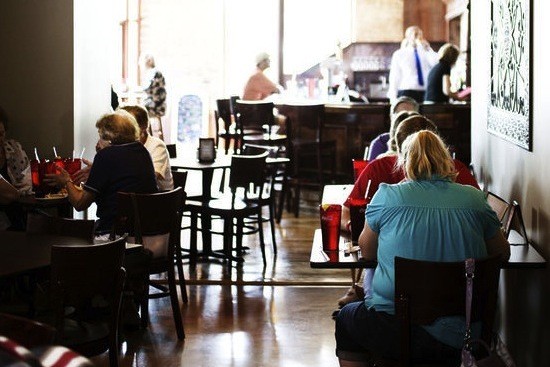 "I learned so much through Josh," Lewis says. "He's a master of knowledge. I owe him a lot: my education, everything. When I met him, I was not the cook I am now, or the chef I am now.

"I was always into more of a country, home-cooking style, and a lot of that was from my mom and grandmom. But once I met Josh, it was on. Those flavors, that style -- I loved it."

When Galliano became the executive chef at Monarch, Lewis followed him there and worked at the acclaimed Maplewood restaurant for the better part of the next four years.

Last February, Monarch's owners announced the restaurant's closure. Lewis faced a difficult decision: "I wanted to continue in the direction I was headed, working for really knowledgeable people and continuing to learn."

However, he knew from Elisa that the situation at Quincy Street was less than ideal. "I wanted to marry Elisa, and at least I could help [the Enrights] in one shape or form. It would be hard for me to go to another restaurant."

"I talked to Mike and Sue," he continues. "I told them, 'This is what it would take for us to survive and get things going.' Pretty much ever since they've been really supportive.

"When I first came in, [employees] were dropping like flies and leaving, not liking what I had to say. It was hard getting people motivated to work because there was no real authority or direction. It was just people coming in and moping around. That was a hard battle, and we're just now starting to function like a true restaurant in my opinion.

"I think we're headed in a great direction."

Gut Check's Chef's Choice profile of Rick Lewis of Quincy Street Bistro continues on Wednesday with part two, a Q&A with Lewis. Part three, a recipe from Lewis, will be available on Thursday.