Wednesday. Hump Day. Congrats, you've made it halfway through the work week!

Unfortunately, you still have two days to go.

Dunno about you, but in order to survive the midweek blues, we're going to need a drink. Which brings us to our Wednesday Gut Check feature:

Each week we take you to one of our favorite St. Louis bars (and, oh, the list is long) for a drink (or two) we -- in consultation with the bartender -- highly recommend.

This week Gut Check suggests Farmhaus (3257 Ivanhoe Avenue; 314-647-3800) in Lindenwood Park. General manager Eric Scholle has been involved in wrestling his entire life. He competed in high school, while attending college at Southern Illinois University-Edwardsville and now coaches wrestling at Triad High School in Troy, Illinois. Still, it comes as a bit of a surprise to learn that the sport Scholle loves pairs well with his job as general manager at Farmhaus.

"A lot of drinks I've made actually have a wrestling theme to them," Scholle says.

The "All I See is Gold" cocktail is inspired by 2012 U.S. Olympian wrestler Jordan Burroughs. Determined to reach the top of the podium at the London Olympics, Burroughs changed his Twitter handle to @alliseeisgold en route to the gold medal in the freestyle 163-pound weight class. 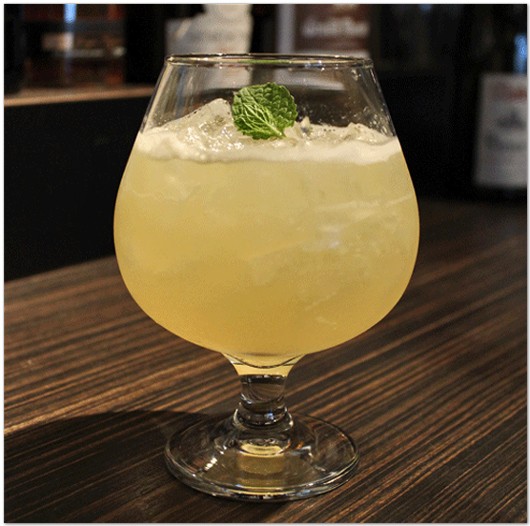 "The drink fits into our bar program, which focuses on local beers," Scholle says.

A mere sip and Gut Check found ourself pining for nice weather. The All I See is Gold is a refreshing beverage that would be perfect to drink on Farmhaus' patio on a hot summer day. Beer doesn't make many appearances in cocktails, but the Wheach provides the golden hue for which the drink is named -- and keeps it light.

Farmhaus doesn't have a printed cocktail menu, Scholle explains. His new cocktail program is based on improvisation; even the juices are squeezed to order.

"I wasn't happy with what cocktails were getting on the list, so I threw it out and started over," he says. "This allows for more creativity with the cocktails. I love the challenge."