Wednesday. Hump Day. Congrats, you've made it halfway through the work week!

Unfortunately, you still have two days to go.

Dunno about you, but in order to survive the midweek blues, we're going to need a drink. Which brings us to our Wednesday Gut Check feature:

Each week we take you to one of our favorite St. Louis bars (and, oh, the list is long) for a drink (or two) we -- in consultation with the bartender -- highly recommend.

This week Gut Check suggests Bar Napoli, part of Cafe Napoli (7754 Forsyth Blvd. Clayton; 314-863-5731) in Clayton. The joint's got class and a loyal fan base -- and the drinks justify the devotion.

On a Wednesday afternoon or evening, Han Tran mans the bottles and mixers, and he aims to please. Tran hails from Vietnam, and he'd be happy to share stories with you while concocting any cocktail you fancy.

"Most people just tell Han to make them something," says fellow barman Andrew Christensen, but Tran's most popular invention by far is the Han Bomb. 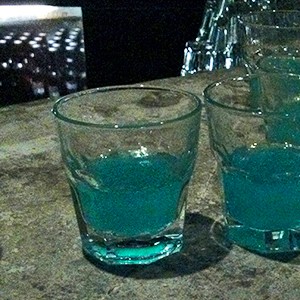 The "Han Bomb" is an electric-blue shot that looks more like radioactive chemical waste than fruity booze, but don't be fooled by its appearance. It's a mixture of Hypnotiq, Three Olives Cherry and Blue Curaçao, with a little Red Bull kicker. It's wildly popular among the regulars, and, Gut Check is forced to admit, actually kind of delicious.

"I'd kill for 'Han Bombs'!" says a fellow sporting a Blues jersey, who appears to have indulged in one or three (though there don't seem to be any corpses lying around). "They're the greatest thing to happen since Anheuser-Busch!"

"It just feels so good when it hits your lips," another barfly puts in. "Everyone in Clayton knows who Han is," he adds. "After Jesus, it's Han."

Our friend might be overstating the point just a smidge, but Mr. Tran indeed makes a bomb "Bomb."

For those less interested in sweet shots, Christensen recommends either Bar Napoli's manhattan or the "Cucumber Delight."

Gut Check loves us a manhattan, but to chase our "Han Bomb," we opted to try the cucumber beverage, which we figured would provide our happy-hour vegetable serving. No such luck with that: The Cucumber Delight is a crisp blend of Square One Cucumber Vodka, Square One Basil Vodka and St. Germain Liqueur, plus splashes of Sprite and sour mix.

It's likely best sipped on a patio under the warm summer sun, but we found it to be a fine way to pretend it's summer even in the chill of February.