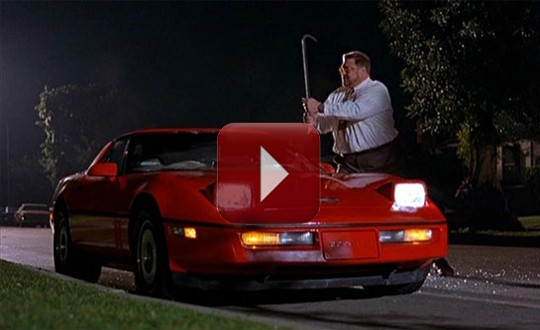 Chefs are passionate people. They have to be, to make a successful career out of a job that involves long hours overseeing painstaking preparations in Hades-hot kitchens.

The flipside to passion, of course, is rage. Eye-popping, vein-bulging, colorful-metaphors-involving-your-mother's-genital-hygiene-spouting rage.

Usually, the target of a chef's wrath is the poor line cook who screwed up the salmon.

Every now and then, though, it is something larger, something immobile, something that provokes in a chef a fury so quixotic in its aim that Gut Check can't help but feel a half- teaspoon's worth of admiration.

According to court records, such is the case of Jorge Carvalho, owner of the Central West End Brazilian restaurant Coco Louco Brasil (512 North Euclid Avenue; 314-367-1600).

A court of law will determine Carvalho's guilt or innocence in the matter of the Ford Focus he allegedly punched. For the time being, one fact is indisputable: Carvalho faces a warrant for his arrest, having failed to appear at a hearing in the 22nd Circuit Court this past Wednesday, February 13.

Judge Bryan L. Hettenbach ordered the warrant issued after neither Carvalho nor an attorney acting on his behalf appeared at a scheduled bond hearing on a criminal charge of property damage in the first degree (ahem, the aforementioned Ford Focus), a felony. Hettenbach set the bond for the warrant at $25,000, cash only.

Gut Check attempted to contact Carvalho at his restaurant. His wife, Rachel, responded to our voicemail, informing us that neither she nor her husband is aware of any arrest warrant. Told that it related to a missed court hearing, she replied, "I don't think we missed anything."

Now, about that Ford Focus.

According to a probable-cause statement Gut Check obtained from the circuit attorney's office, Carvalho "was seen punching B.G.'s Ford Focus. The Ford was parked in front of the defendant's place of business, [redacted], on N. Euclid. The defendant caused damage to the front windshield, passenger's side panel, the roof and antenna. The damages are estimated to cost approximately 1600$ in order to repair."

(As a matter of policy, the circuit attorney's office declined to name the victim beyond his or her initials, B.G.)

A bond-forfeiture hearing is scheduled for March 28. More as we learn it. Read the full probable-cause statement on the next page.

Probable Cause Statement Jorge Carvalho by