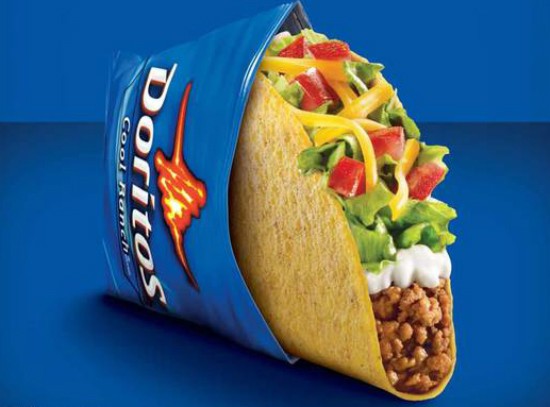 When Taco Bell partnered with Frito-Lay last year to create nacho cheese Doritos-flavored Doritos Locos Tacos, the Internet all but collapsed in on itself like a dying star. While we've already forgotten the name of the 2012 Republican Party presidential candidate, we might never forget the first time we heard tell of Doritos Locos Tacos.

Though whispers of the tacos arrival made rounds via Taco Bell's Facebook page in early 2013, company chief executive officer Greg Creed didn't confirm the product's launch till January 29. Taco Bell has since revved-up its social media promotion of the Cool Ranch Doritos Locos Tacos, complete with a commercial wherein Taco Bell reaches out to a handful of excited Twitter followers in a fan-participation giveaway stunt. There's also a Twitter hashtag (#coolranchdlt) being promoted by Taco Bell to fuel trending leading up to its March debut.

We are sorry to report that this shell is not a true Dorito. It just doesn't have the same crunch. That said, it's a fair approximation, and it's darn tasty. So no complaints, just a suggestion to lower your expectations a smidge and don't go in expecting a taco shell that jumps out and screams, "I'm a goddamn nacho-cheese Dorito!" the way some (and by "some" we do mean Gut Check) might hope it would. Still, there's something to be said for subtlety, because the shell nicely complements the taco.

Will the Cool Ranch Doritos-flavored shell be an improvement, or left lacking? Check back for an official Gut Check taste test on or around March 7 to find out.

Junk + Food This Just In