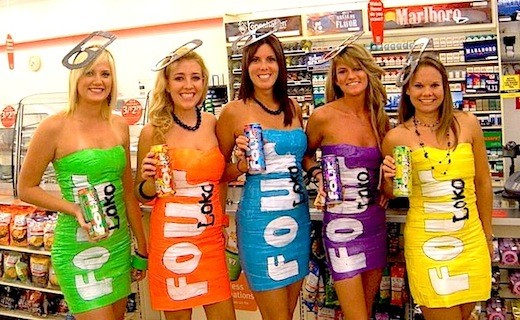 If you're one of the few poor souls who have no taste buds and therefore love Four Loko, the U.S. Federal Trade Commission is worried about you.

On February 12, the FTC reached an agreement with Phusion Projects, LLC, makers of Four Loko, a carbonated, fruity malt beverage. Phusion is now required to re-label its infamous booze in an effort to make drinkers more aware of what they're consuming. Because, you know, Four Loko drinkers are a discerning bunch.

The FTC took issue with the "alcopop" brand's packaging and marketing practices. Four Loko cans will now have an "Alcohol Facts panel," which, according to the FTC's statement, "sets forth the container size, percentage alcohol by volume, number of servings in the container, and serving size in fluid ounces. It also contains the statement, 'According to the U.S. Dietary Guidelines, a serving contains 0.6 ounces of pure alcohol.'"

Four Loko states on its website that the company plans to combat the binge drinking made possible by the cans' 23.5-ounce size by introducing resealable containers. As a result of the FTC agreement, they have six months to make the containers for all flavored malt beverages containing more than two and a half servings of alcohol resealable.

Apparently, the FTC is also concerned that Four Loko's disgusting fruity taste and soda-like packaging are evidence that the company is directly marketing to underage drinkers. Phusion Projects denies this and if there are any plans to change the beverage's ingredients or can design, no one's saying so.

Gut Check caught up with Bruce Lee Livingston, the CEO and executive director of Alcohol Justice, an industry watchdog based out of California, who had some choice words about Four Loko.

"In the course of building their market share for these 'alcopops,' the industry grew the size and alcohol contenct of the products," Livingston says. "They tend to be 16- to 24-ounce products with 7 to 12 percent alcohol. That's the equivalent of 4.7 alcoholic drinks per can. It's a binge in a can."

Livingston also states that while Alcohol Justice is glad to see some labeling happening, they are not pleased that the labeling exploits the high alcohol content of Four Loko. They also don't think that introducing a resealable can will make much of a difference.

Anything else while we've got you on the horn, Mr. Livingston? "Yes, they are frat guys," he says of Four Loko's CEOs, all of whom were indeed members of fraternities in college. "They are indifferent to the public health and public safety. They even sent us a cease-and-desist order for putting their logo in a PowerPoint."

This is not the first time Four Loko has been the object of the FTC's (or Alcohol Justice's) ire. In 2010 Four Loko voluntarily (read: to get the FTC off its case) reformulated its caffeinated malt beverage, removing the caffeine, guarana and taurine. This was done partially in response to the hospitalization of college students in New Jersey and Washington and concerns that the caffeine masked the effects of the alcohol.

"It's one product that has really lowered standards for the entire beer industry," Livingston says.

Phusion Projects is directing all inquiries to its statement, and the FTC has not yet returned our calls.