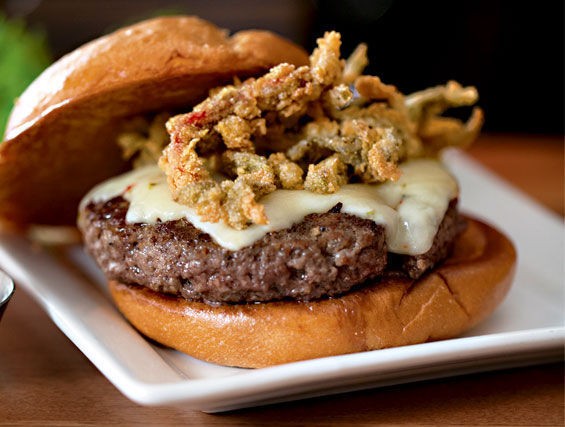 Congrats to Steve Gontram and St. Louis' own Five Star Burgers (8125 Maryland Avenue; 314-720-4350) for serving one of the "25 Hottest Hamburgers in America Right Now," according to Eater National. Five Star's "Dad's Green Chile Cheeseburger" was singled out as a must-eat item, joining stellar burgers from San Francisco, New York and Chicago.

Gontram's father, Bob, opened the original Five Star Burgers in New Mexico, and he has since opened two more New Mexico locations, as well as a franchise in Colorado. Steve Gontram says the Five Star Burgers he opened in St. Louis this past October is different from Five Star's other iterations.

"It's a different menu, and we have kind of a different logo," Gontram explains. "Our concept is a little less Southwestern than [my father's]. I don't want to confuse the two."

If green chile cheeseburgers are such a New Mexican staple, we had to ask: Why did Gontram's version beat out his father's on Eater National's list?

"He's gotten quite the accolades, as well!" Gontram says. "USA Today named his one of the top 50 burgers in the country. They picked a burger from each state, and his was the one picked from New Mexico."

What sets Gontram's burger apart from the one on his father's menu in New Mexico are the fried chiles that top it off. Underneath the burger are diced Hatch green chiles, and a slice of melty pepper jack goes on top. Add the fried chiles and a side of chile mayonnaise, and you've got one hot burger.

Gontram says he hasn't tasted any of Eater's other winning burgers, but he'd like to.

"There are a couple of places that I'm familiar with, but no other burgers that I've tried," he says. "But it definitely puts a bunch of places on your radar."