Welcome to Girl Walks Into a Bar, a weekly Gut Check feature that spotlights local bars and bartenders. This week, Jaime Lees profiles Joel Burton of Taste. Below is a Q&A with Burton, followed by the recipe for the Jack Rose. 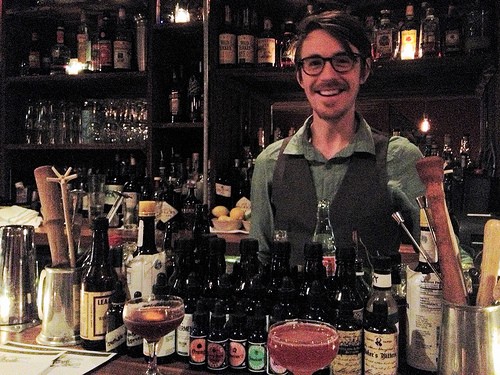 The tiny restaurant and bar is situated near the southernmost part of the Central West End proper, on Laclede Avenue at South Euclid Avenue. A small door opens to a curtained entryway, and beyond that there's a tall wood bar and a few small tables for dining. The dark bar is gorgeous and illuminated by delightfully dim, faux vintage multi-filament light bulbs.

We were greeted by bartender Joel Burton and his lovely smile. Burton is a good guide for the uninitiated, asking customers what they like and don't like before offering suggestions -- he'll even mix you up something special on the spot if he's inspired. He described Taste as a "safe environment to try new things."

We spoke to the personable Burton in short bursts between mixing fizzy drinks -- he had a lot of cocktails to shake on this particular evening.

A girl walks into a bar and orders a _____, she has just earned your undying admiration. Probably a De La Louisiane or an Old Fashioned. The De La Louisiane is one of the classics we have around here, it's kind of like a Manhattan, it has some of the Bénédictine in it instead of the vermouth. So it's just a little bit of honey and herbal flavors. It's spicy and just fabulous.

Other than your own place, where do you go to get a good drink and what do you get? I usually go to Sanctuaria. They'll make me cocktails, or they'll serve me a shot of Fernet and a beer. I usually don't drink cocktails when I go out. I was originally, like, a beer and wine drinker. So the cocktail thing is still... I haven't found my home for it yet.

What's one thing that most people don't realize about crafting cocktails or bartending? That it is a craft and things take time. And I'm sorry if I take a couple of minutes to make your drink, but there's a method and we all have the same goal: which is to make something that is absolutely stunning for you. I could do it different every time.

Who would you most like to have a drink with? And why? That's a good question! I don't know... um... Oh! I want to drink with James Murphy from LCD Soundsystem. Because he's kind of my hero and also he's awesome. And I would just like to know what he has to say about everything. He's kind of a maniac but he's kind of a badass. I want to see what he thinks.

What's the most bizarre or worst drink that someone has ordered from you? I don't know, I usually try to block those things from my memory. I usually will just make it and then get rid of it. We always get requests for birthday cake shots...

What's the coolest or weirdest thing you've witnessed while working at Taste? On my birthday, there were a bunch of people in from the Speed Rack competition. It's a ladies speed bartending competition. They did this a couple of months ago down at 2720-- it's all to benefit breast cancer. And the people that organized it came in here, and it was a Sunday night and it was late and they were the only people in here at that point. And it was my birthday right after work, so they gave me a Fernet luge through a menu. They just folded one of the cocktail menus in half and I just took the shot straight down the menu. It was totally awesome.

In honor of Burton's answer to who he'd like to most drink with, here's "Drunk Girls" by LCD Soundsystem: