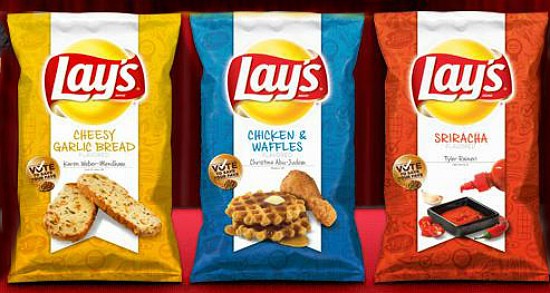 Three new flavors of Lay's potato chips enter grocery stores across the country this week, but only one will earn a permanent place on chip aisle shelves.

In late 2012 Frito-Lay launched its "Do Us a Flavor" contest, encouraging potato-chip fans to dream up a new flavor for Lay's chips. The three finalist flavors were announced in early February: Cheesy Garlic Bread, Chicken & Waffles and Sriracha. The contest continues as Frito-Lay asks consumers to vote for their favorite of the three via a Facebook app (and you gotta be logged in to do so). The winning chip flavor will join Lay's line of potato chips, while the losers, we imagine, will end up on eBay.

Curious to taste these limited-time snacks, Gut Check called a few local grocers in search of 'em. And wouldn't you know it, all three flavors are now available in a few St. Louis grocery stores!

Our first call to the Schnucks (6600 Clayton Road, Richmond Heights; 314-644-0510) in Richmond Heights returned positive results: They've got 'em, and they're going for $2.50 a pop (or two bags for $5). Calls to several other Schnucks stores were less promising; One said they didn't have them yet but expected them soon, while at a third location a store employee reacted with confusion and attempted to transfer us to the dairy department to check on its selection of cheesy garlic bread. She sounded slightly disgusted when we repeated "Cheesy Garlic Bread potato chips."

Currently the Dierbergs (8450 Eager Road, Brentwood; 314-962-9009) in the Brentwood/Eager Road Industrial Complex doesn't have the chips in stock, but the very nice employee we spoke to said he expected the store would have them soon.

Now that we know where to buy them, we're a food blog on a mission. Expect an official Gut Check taste test in the very near future.