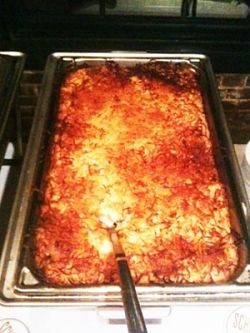 Gut Check has been pining for fish fry season, which begins this weekend, since at least last Easter. (Maybe longer -- we're of the disposition to start getting nostalgic for things even before they're over.) But we're going to have to postpone our first expedition to the Catholic school cafeterias and church basements of this fair city. That's because we've been waiting an entire year for the Schlafly Tap Room's (2100 Locust Street; 314-241-2337) annual Cod and Cask Festival (running this year 5 p.m. to midnight on Friday and 11 a.m. to midnight on Saturday) -- and our one chance this year to devour a plate of plokkfiskur.

What is plokkfiskur, you ask?

Why, it's the food of the gods. The Scandinavian gods, that is. In Valhalla, you can bet that Odin and Freya and Loki and all the rest get to eat this stuff every day.

More specifically, it is, in the words of Andy White, the Tap Room's chef and general manager, "a baked fish pie. The base is mashed potatoes. We mix in fresh cod -- not salt cod like we do for brandade -- flaked and mixed with roasted garlic. We bind it with a Béchamel, like you do with lasagna, and a touch of yellow curry and smoked gouda. We top it with smoked gouda and bake it for about 45 minutes. It's pretty good."

White learned to make plokkfiskur from Hakon Ovarsson, an Icelandic chef who flew over to cook for the first few Cod and Cask Festivals in 2008 and 2009. Ovarsson has stopped coming ("I think they ran out of money," White confides), but he left White with his secret, namely the parts about mixing in the Béchamel with yellow curry and smoked gouda and topping the whole thing with cheese and sticking it in the oven.

In preparation for the festival, White and his staff started peeling potatoes yesterday. In all, what with the complete Cod and Cask Festival menu -- which includes not only plokkfiskur, but also fish and chips, cod chowder and brandade -- he expects to go through between 2000 and 2500 pounds of potatoes and 1500 pounds of cod before the festival ends on Saturday night. That's about two tons of food, for those keeping track at home.

There will also be beer. Lots and lots of beer. At 3 p.m. on Saturday, there will be a ceremonial tapping of casks from local craft breweries: 4 Hands, Civil Life, Kirkwood Station, Perennial Artisan Ales and Urban Chestnut.

But pfffft to beer! You can drink it any time. This is, however, your one and only chance this year to eat plokkfiskur. White will not be making it again until next year's Cod and Cask Festival. Consider yourself warned.

If you'd like to venture making your own plokkfiskur at home, though, check out this instructional video after the jump courtesy of an Icelandic chef named Margret. Who is not to be confused at all with the Swedish Chef.