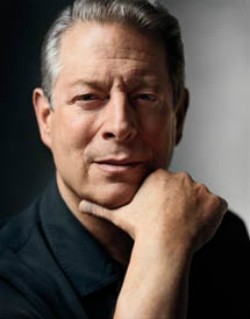 Late yesterday afternoon, Local Harvest Cafe & Catering (3137 Morganford Road; 314-772-8815) announced via its Facebook page that it will cater a vegan dinner for Gore and his staff on Saturday evening.

Horine wasn't sure if Gore has adopted a totally vegan diet, but he did say the former VP requested a vegan, nut-free and oil-free menu.

"One of his staff members contacted us last week about his visit to St. Louis," Horine says. "They had some fairly precise dietary restrictions, told us what they were and asked us to come back with a menu. We did and they approved it."

The menu for Mr. Gore was developed by chef Clara Moore, Local Harvest's former executive chef who announced plans in December to move to Seattle. Horine says Moore is still working with Local Harvest in a part-time capacity until her move later this month.

Horine says that his business partner, Local Harvest co-owner Maddie Earnest, will be delivering dinner to Gore and his staff -- and obviously, is looking forward to meeting the former vice president.

Curious to try the meat-free, VP-approved menu? Local Harvest's Tower Grove location will be serving the vegan dinner special to guests this weekend, too. Hey, if you can't dine with Al Gore, at least you can in spirit.