Welcome to Girl Walks Into a Bar, a weekly Gut Check feature that spotlights local bars and bartenders. This week, Jaime Lees profiles Laura Therina of Baileys' Chocolate Bar. Below is a Q&A with Therina, followed by the recipe for the Mexican Chocolate Martini. 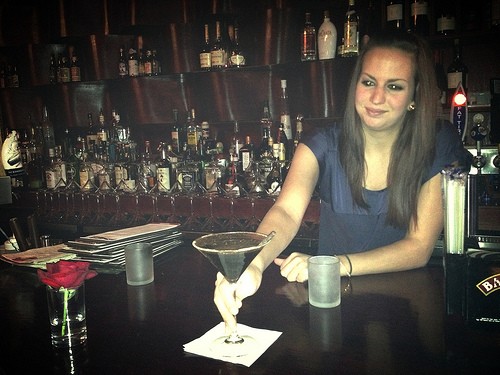 With the most romantic day of the year coming up soon, we decided to check in at Baileys' Chocolate Bar (1915 Park Avenue; 314-241-8100). With its dark, hushed atmosphere and surprisingly strong martinis, the bar is one of St. Louis' premier Valentine's Day venues. It's the perfect date destination for cozy little table for two. (Or a cozier table for three, if that's your preference. We don't judge.)

Located in historic Lafayette Square, Baileys' Chocolate Bar has long held down the same block that now hosts neighbors like Square One Brewery. The building includes a low-lit restaurant backed with a generous outdoor dining area, and the menu offers options for every type of gluttony: savory snacks, rich cheese plates and delicious deserts.

The front door opens to a warm, wood-wrapped bar, and that's where we found bartender Laura Therina. Therina has been employed at the bar for more than two and half years, working her way from hostess to server to bartender. She knows all the details of the business and offers up interesting information about the building, including the details of a rumor among the staff that the location is haunted.

She's engaging and sweet, fist-bumping with a regular and gossiping with a man about his pretty date while the lady was off in the powder room. We spoke with Therina as she was behind the bar mixing up cocktails and Radiohead's "Knives Out" played quietly in the background.

Describe your bartending style in three words. [Therina was bashful on this question, but we would describe her style as "friendly and efficient"]

A girl walks into a bar and orders a _____, she has just earned your undying admiration. A cold signature martini.

Other than your own place, where do you go to get a good drink? And what do you get? I go to Taste in the Central End and get an "Abduction." It's got a mascarpone cheese, duck fat infused Grand Mariner, some lemon twists and black pepper. It is awesome.

What is one thing that most people don't realize about crafting cocktails or bartending? I don't think they realize it's a huge thought process and it's not just about what we want to do, ourselves, it's about what other people would like. So, here, people come in here for chocolate martinis, and we try to think of fun stuff that people would enjoy.

What is the most bizarre or worst drink someone has ordered from you? I'm sure it's some stupid shot.

What is the coolest or weirdest thing you've witnessed while working at Bailey's Chocolate Bar? Well, we get a lot of bachelorette parties. So, I see a lot of sashes, a lot of crowns and tiaras. Recently, we had a hat party and it was twenty people in huge hats. So that was different and cool. And they were fancy hats. One guy dressed up Jim Carrey's character in Dumb and Dumber, in a light blue suit and hat. And he kind of looked like Jim Carrey anyway, so it totally worked!