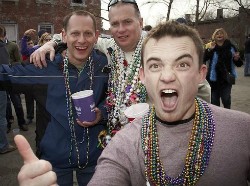 It's that time again folks, that time when it's perfectly acceptable to get day drunk in public while getting as undressed as the 51-degree forecast will allow us. That's right, Mardi Gras is this Saturday, February 9, in Soulard. If the only thing on your Mardi Gras to-do list so far is "party," then check out Gut Check's list of the top ten Mardi Gras-themed food and drink events happening in St. Louis, and maybe find a more solid plan -- that will, of course, still involve plenty of partying.

Molly's in Soulard (816 Geyer Road; 314-241-6200): VIP tents, cabanas, tables and shuttle bus packages. Food buffet, restroom access and open bar, certain packages also come with complimentary liquor of your choice. Shuttle bus package picks you up at destination of your choice and drops you off in Soulard. Saturday, February 9, at 11 a.m. Tickets cost $85 to $2,500.