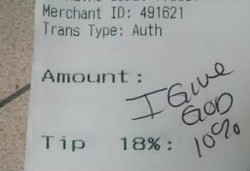 The message a local pastor left in lieu of tip has been setting the Internet afire all week.

Pastor Alois Bell went to Applebee's last Friday night with her congregation. She was apparently so full of the Holy Spirit that she shared some with their server after seeing the table had been automatically charged 18 percent gratuity.

Another server took a picture of the receipt and published it to Reddit, thinking that because the signature was hard to make out and the restaurant's name was cut off, it would be a harmless laugh. She hadn't counted on the picture going viral.

Here's the image as it appeared on the atheism Reddit, under the title "My mistake sir, I'm sure Jesus will pay for my rent and groceries":

In case it's not clear, that says, "I give God 10% Why do you get 18," with the automatic tip amount scribbled out and a "0" for additional tip. Above the signature is the word "Pastor." Apparently the 10 percent refers to the amount Bell tithes each year.

The Redditor, named "gateflan," went on to say in the comments that it was a party of 20 who'd asked for separate checks, then became incensed when they still had to pay automatic gratuity. But things quickly got out of hand as the post went viral and commenters started investigating who the offending pastor was. Here's "gateflan" realizing it's gone too far:

PLEASE STOP POSTING PERSONAL INFORMATION YOU ARE BRINGING UP COMPLETELY RANDOM PEOPLE WHO DON'T DESERVE A REDDIT MOB BANGING DOWN THEIR INTERNET DOOR.

Alas, it was too late. It wasn't long before someone linked it to Pastor Bell. She somehow heard that her receipt was being passed around online and called up the Applebee's, demanding her server be fired. Management ran it down and discovered that "gateflan" is actually Chelsea Welch. Welch was sent packing and Applebee's released this statement:

Our Guests' personal information - including their meal check - is private, and neither Applebee's nor its franchisees have a right to share this information publicly. We value our Guests' trust above all else. Our franchisee has apologized to the Guest and has taken disciplinary action with the Team Member for violating their Guest's right to privacy. This individual is no longer employed by the franchisee.

Bell told FOX 2 that her table was actually ten people and that she did leave $6 in cash after scribbling out the tip on the receipt (Applebee's went ahead and charged her the 18 percent anyway). But she did express contrition.

Welch, on the other hand, told The Consumerist that she doesn't understand why she was fired. She says posting a picture of a receipt doesn't violate anything she could find in her employee handbook.

"We make $3.50 an hour. Most of my paychecks are less than pocket change because I have to pay taxes on the tips I make," she explains. "After sharing my tips with hosts, bussers, and bartenders, I make less than $9/hr on average, before taxes."

Welch has agreed to speak with Gut Check later this afternoon. We'll update when she does.

While this incident brings up a ton of philosophical questions about everything from God to economics, no one has come out the winner here. Welch is unemployed, and Bell is getting bombarded with hateful calls and e-mails. It appears she's deactivated all the profile pages for her ministry. Meanwhile, a "Hire Back Chelsea" Facebook page has gone live and has nearly 3,500 likes.

This is also a testament to the power of "receipt memes." Who could forget "lady chinky eyes" or "Fat Girls." Here's another local specimen we saw on the local St. Louis Subreddit, though the poster characterized it as a "nice ego boost":