Hardee's Fish Slutburger to Arrive Just in Time for Lent 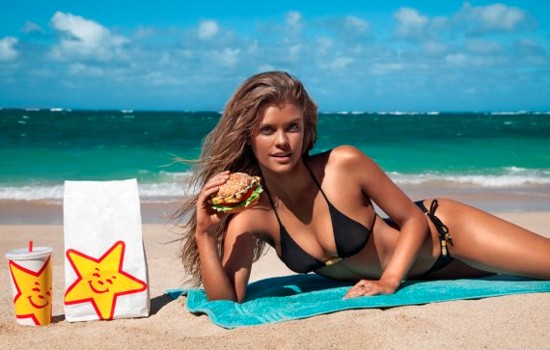 Long known for pressing thick, squishy burgers into the hands of famous females who are neither thick nor squishy, St. Louis-based Hardee's (a.k.a. Carl's Jr.) has mixed it up a little bit for this year's Super Bowl commercial.

Fret not: It's still porn-y.

Though the ad once again featured a waif of a thing getting freaky on/near a sandwich, it was completely different this time. That's because twenty-year-old Danish supermodel and handball enthusiast Nina Agdal, all glistening skin and wind-whipped hair, was eating a 420-calorie charbroiled fish sandwich rather than the typical side of beef sloppily contained between two buns.

See, while many places offer fried fish, Hardee's boasts that it will be the very first national fast-food chain to have a broiled option.

"Sometimes you want fried, and sometimes you don't. And Nina doesn't want fried," smirks Justin Hooper, creative director for 72andSunny. Hooper was formerly employed by the advertising agency Mendelsohn/Zien, perhaps best known for dreaming up the racy ads for the fast-food company, which have starred the likes of Paris Hilton, Padma Lakshmi and Kim Kardashian.

Agdal's apparently a fan of Hooper's work, too, gushing in this behind-the-scenes clip that she's "honored" join the ranks of upstanding human beings including Kate Upton, and, yes, Kardashian, who've participated in commercials for what Gawker refers to as "Slutburgers."

"Well, my booker called me and told me about this new commercial for Carl's Jr., and that I was going to be shooting in Hawaii and eating a fish sandwich," Agdal says. "And, I mean, who doesn't want to do that?"

Whether consumers will eat up the new, lower-calorie option (the charbroiled Atlantic cod comes on a honey-wheat bun with tartar sauce, lettuce and tomato) remains to be seen. It rolls out today, February 4, in local Hardee's locations.

Here's one thing Gut Check can be sure of, straight from Agdal's Facebook page: "Success comes in can's, not can'ts," she says.