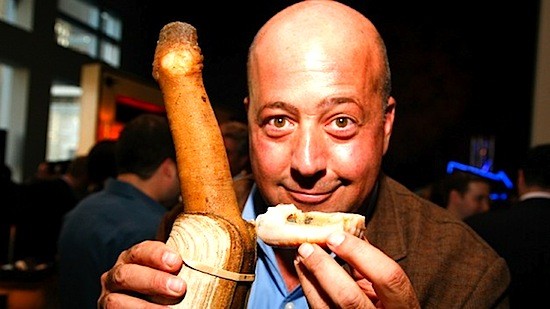 Lest there was any doubt, St. Louis is officially bizarre. According to the Travel Channel, that is.

Soulard Farmers Market (730 Carroll St., 314-622-4180) announced on its Facebook page last night that Bizarre Foods America will be shooting at the market in March. They haven't yet set an exact date, but the market promises Facebook fans they'll relay the details as soon as they know 'em, "so that you can come down and see one of America's most beloved TV personalities at work."

See also: - "Eat More Beaver" (RFT feature about exotic meats sold at Soulard, featuring a tasting with renowned chef Larry Forgione, who cooked up a special feast including dishes made with raccoon, beaver and muskrat, a.k.a. "marsh hare")

Zimmern has indeed become a beloved television personality since his show debuted in 2007. Zimmern has since traveled the world eating local delicacies. Last season the show changed its name from Bizarre Foods with Andrew Zimmern to Bizarre Foods America, presumably because Zimmern now believes our nation's cuisine is fair game for the "bizarre" label. (The word, when attached to food, makes Gut Check cringe a little, and not because we're squeamish about what people choose to put in their mouths. We're the "eat and let eat" type. To paraphrase our mother, bizarre is as bizarre does.)

Be that as it may, fair game is likely on Zimmern's list. Specifically raccoon, beaver and possum. Muskrat too, if it's available. Squirrel? Probably too pedestrian for A to the Z. He can spice things up with a little Goose Poop, perhaps. We wouldn't rule out a stop at Peter's Pork Rinds, either. More as we learn it.