Welcome to Girl Walks Into a Bar, a weekly Gut Check feature that spotlights local bars and bartenders. This week, Jaime Lees profiles Renee DePauli of Friendly's. Below is a Q&A with DePauli, followed by the recipe for the Blue Steel. 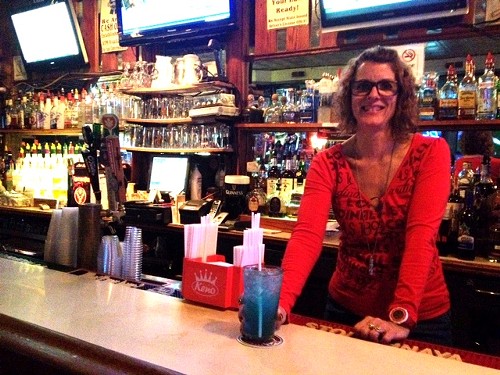 Friendly's Restaurant & Pub (3503 Roger Place; 314-771-2040) is a south-city institution. Much more than just a neighborhood sports bar, the business has been at the same address (the corner of Roger Place and Potomac Street) for more than 85 years. Current owner Denny Domachowski has engineered the kind of place that is always welcoming and cheap, making it easy to become an accidental regular.

In anticipation of the Super Bowl this weekend, Gut Check dropped in to Friendly's for a drink and good conversation with bartender Renee DePauli.

It's a customer-driven bar, and the management is always willing to give back to the community through gestures like sponsoring a kickball league. And in addition to the current "Home Team Special" (free hamburgers, hot dogs, nachos and bratwursts during the month of February during Blues games), the bar also announces nightly specials on its Facebook page, offering cocktails for a fraction of the price of competing establishments.

There is no shortage of entertainment at this bar, with televisions covering nearly every square inch of wall space and rooms filled with all manner of games, from table shuffle board to pool to foosball and video bowling. The games add an extra layer of energy to bar, which seems to be always humming like a beehive.

At the heart of all of this is Renee DePauli. She's the unofficial mama bear of the Friendly's family. DePauli is easy with both a smile and an eyeroll. She has tended bar at Friendly's for eleven years, and she seems to look upon her patrons as her (drunken) kids. She is universally beloved by the wide variety Friendly's folk, from college students to wrinkled old regulars. She's a fan of all sports, but she bleeds Blue, that's for darn sure. If the Blues are having a bad night, DePauli is having a bad night. But she won't take it out on you; she'll just be open to commiserate. (Actual quote: "They were so flat in front of the net. They gave up the puck, like, seven times!")

We did a quick interview with DePauli while she was behind the always-bustling bar while Modest Mouse's "Float On" and David Bowie's "Space Oddity" blared in the background.

Describe your bartending style in three words. [Laughs] Old and nasty! If girl walks into a bar and orders a ____, she has just earned your undying admiration. A Blue Steel. [Vodka, triple sec, blue Curaçao, sours, club soda]

Other than your own place, where do you go to get a good drink and what do you get? Jack Patrick's, a Seven and 7.

Who would you most like to have a drink with? And why? My husband, Ed, because I love him.

What is the most bizarre or worst drink that someone has ordered from you? Well, yesterday someone asked if we had whiskey. And then ordered it. That was a bizarre. I mean, we're a bar; we have whiskey. What's the coolest or weirdest thing that you've witnessed while working at Friendly's? Can I tell you the funniest? Someone tried to get change out of the ATM machine.

DePauli says the Blue Steel cocktail is roughly 3/4 of a glass of vodka with an ounce of the other ingredients. 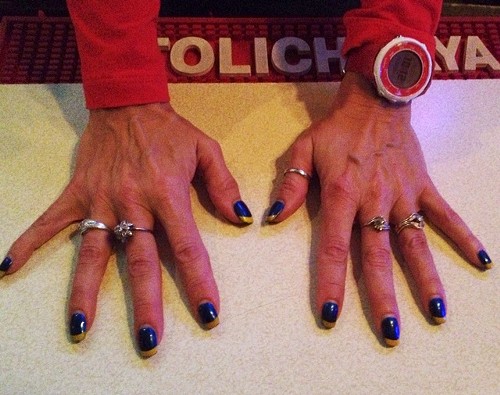