[UPDATED] On the Map: National Food Truck-Tracking Site and App to Add St. Louis This Week 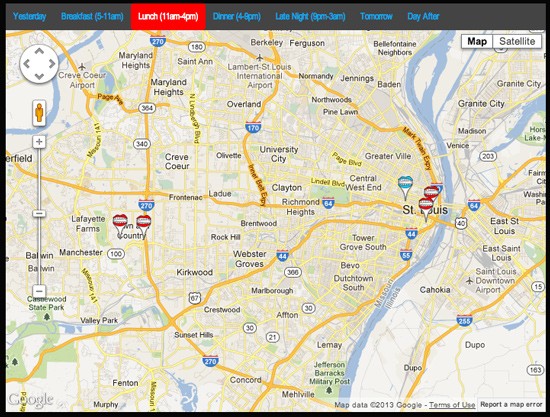 Updated January 29: Roaming Hunger's St. Louis food-truck-tracking page went live on Wednesday, January 23, and it seems there are still a few kinks to be worked out.

When Gut Check took a gander at the site this week, only ten of the 30 trucks in town were actually on the map. More trucks are slowly being added (there were five the first time we checked), and there's a Twitter feed on the St. Louis page to inform readers about the locations of trucks that may not be on the map.

We caught up with Roaming Hunger's community manager, Ryan Carlin, who says it's all in the way the trucks tweet. The mapping program works by taking location and time info from the trucks' tweets, then placing the trucks are on the map. Even after getting e-mail instructions from Roaming Hunger about the proper way to tweet (there's gotta be an exact address and time, folks), Carlin says, some trucks still haven't caught on, so they're not appearing on the map.

Carlin tells us there've been some technical problems on the site, as well, and that more trucks should be visible as they iron out the wrinkles. Roaming Hunger has learned that it generally takes a new city a couple of weeks to get every truck on the map.

Says Carlin: "We do expect it to pick up."

Roaming Hunger, a website and iPhone app that tracks food-truck locations, has added St. Louis to its lengthening list of cities and vendors.

The site is the brainchild of Ross Resnick, a 28-year old with a background in marketing and a profound love of street food.

Resnick, who lives in Los Angeles, launched Roaming Hunger back in 2009 with maps and information about food trucks in Los Angeles and San Francisco. Today the site maps more than 2,800 trucks in 30 cities. St. Louis is slated to join the list on Wednesday, January 23, with Honolulu, Sacramento and Kansas City close behind.

"We're really excited about adding St. Louis to the site," Resnick says by phone from LA. "There are some great vendors there. We wait until there are about 25 to 30 vendors to add a city to the site, and St. Louis has been a slow creep up. Once a city reaches that point, though, it's really possible for it to explode from there."

In order to map a city's food trucks (which in some cases number in the hundreds), Roaming Hunger scours social-media sites, extrapolates location data and plots it on Google maps. The St. Louis page is tracking 30 vendors, and as more food trucks pop up, they'll be added to the list.

Resnick says his list has become a rite of passage for food trucks, whose operators often request to be added before they're actually up and running. (He'll add food trucks to Roaming Hunger's radar when eaters suggest them as well.)

"We get so many letters and praise for the service," he says. "It's bigger than the individual vendor -- it's about creating a lifestyle and an entirely new way of eating that's happening nationally and in pockets locally. We have these amazing trucks individually, but together it creates a really, really nice portfolio."

Roaming Hunger doesn't host ads but generates revenue by matchmaking trucks and individuals or companies seeking to book them for events, and by pairing brands with food trucks to create marketing campaigns called "Food Truck Takeovers."

Resnick says he hopes to get to St. Louis soon. The truck he's most eager to check out in person: Guerrilla Street Food.

And if he operated his own food truck?

"Macarons," he says. "Like, the sandwich kind, in all different colors and all different flavors. It would be called Mac My Roon. Oh man, that's bad, isn't it?"

Food Trucks This Just In