The Wine Merchant: A 12-Year-Old Bordeaux You Can Afford? 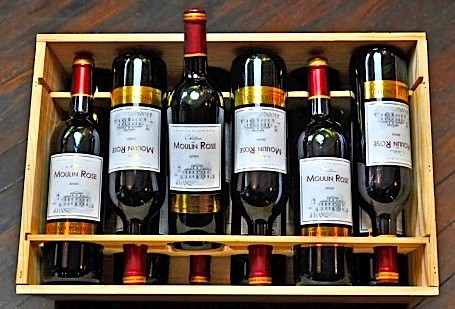 Gut Check loves good Bordeaux and cheap wine, which meant we were plenty juiced when we opened our e-newsletter from the Wine Merchant, Ltd. (20 S. Hanley Road, Clayton; 314-863-6282) and learned the store was expecting a shipment of 2000 Château du Moulin Rose Côtes de Castillon this week.

It's not every day you encounter a decade-old Bordeaux at a wine store. And when said wine is priced at $12.99, Gut Check doffs our smoking jacket, untwists our ascot, puts on our parka and hies -- veritably hies -- to the source, partitioned fabric six-bottle bag in our neatly manicured, Isotoner-begloved hand.

This time, though, we called ahead. And we were glad we did.

The Merch's Philip Peimann tells us this Bordeaux, made from a blend of merlot and cabernet franc grapes, has a classic, earthy taste with elements of red fruit (think: strawberry). For those unfamiliar with the wines of the Côtes de Castillon (yes, that's Gut Check, raising our hand), Peimann compares this bottle to a cabernet from the state of Washington.

But there's a slight hitch. The Wine Merchant was expecting a shipment of about twenty cases of Château Moulin du Rose, but only a handful arrived on schedule Thursday. The store has a tasting scheduled for tonight (Friday) at 7 p.m. and has set aside a sufficient quantity for attendees, who can reserve bottles and pick them up when the rest of the wine arrives in a few days.

Again, it's rare to see a twelve-year-old Bordeaux at a retailer, rarer still to see one that costs $13 and is said to taste pretty good. Gut Check knows better than to expect the likes of an '82 Lynch-Bages (which still haunts our dreams), but we've claimed six bottles for our ownself, so we suggest you arrive early to the tasting and put your name in before the hordes descend.

While we were at it, we also snagged a few bottles of the two brand-new offerings from California's Orin Swift Cellars, which we were surprised to see were priced in (well, almost in) the Gut Check wine wallet wheelhouse. Established in 1998 by winemaker Dave Phinney, the Rutherford-based winery is known for big-ass reds made from grapes Phinney sources in France that have become darlings of the wine-collecting set.

Gut Check is a drinker, not a collector, so it came as news to us that Phinney has released two non-vintage wines, Locations F1 and Locations E1, showcasing grapes from France and Spain, respectively. They're going for $15.99 at the Wine Merchant, as long as the stock holds out. We're especially looking forward to trying the French iteration, a Rhône-y grenache/syrah blend with assorted Bordeaux varietals tossed in.

If you're intrigued, the Wine Merchant will have the Swift wines open for sampling from noon till 4 p.m. Saturday (including some of Phinney's pricier vintage bottles).